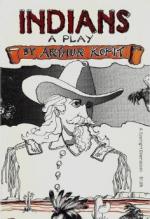 Arthur L. Kopit
This Study Guide consists of approximately 31 pages of chapter summaries, quotes, character analysis, themes, and more - everything you need to sharpen your knowledge of Indians.

Indians, by Arthur Kopit, was first staged at the Aldwych Theatre in London on July 4, 1968. It is a long one-act play that is about the genocide of the American Indians and the legendary figure of Buffalo Bill who is both sacrificial hero and sly showman. Indians is an experimental, absurdist piece that eschews conventional plotting and characterization. These qualities brought Indians a fair amount of criticism of the play's structure. Nevertheless, the power of this play's message and the new presentation that it attempts garnered Kopit admiration, launching his career as a playwright from collegiate productions to the professional realm.

The late 1960s, when Indians was first produced, was a tumultuous time in the history of the United States. Minority groups, including the American Indians, were fighting for equal civil rights, which were legally granted by the Civil Rights Act of 1964. Abroad, the U.S. government had involved itself in the Vietnam War against which many U.S. citizens protested. Kopit was inspired to write Indians after reading that the deaths of innocent people killed in the Vietnam War were viewed as the inevitable consequences of war, reports Lewis Funke in the New York Times. Indians is a critical look at a brutal period in U.S. historythe consequences of which Americans were still trying to face and acknowledge in the early 2000s.

More summaries and resources for teaching or studying Indians.