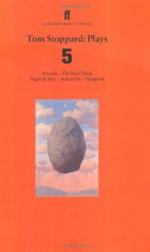 Coomaraswami is the president of the Theosophical Society in Jummapur, India. He greets Flora upon her arrival at the train station in 1930.

Flora Crewe is an English poetess who travels by herself to India in April 1930, presumably for her health, to live and write. In India, she encounters Nirad Das, an amateur artist who paints her portrait while she writes. Flora learns from Das about the struggle among Indians for independence from British colonization. Flora's interactions with Das take on an erotic tone when, one day, overcome by the heat, she lies naked in her bed while talking to him. While in India, Flora is also courted by the British official, David Durance. Flora dies and is buried in India in June, 1930. Over fifty years later, in the mid-1980s, the scholar Eldon Pike, who has published The Collected Letters of Flora Crewe, is collecting information...