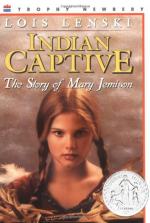 Lois Lenski
This Study Guide consists of approximately 64 pages of chapter summaries, quotes, character analysis, themes, and more - everything you need to sharpen your knowledge of Indian Captive: The Story of Mary Jemison.

This detailed literature summary also contains Quotes and a Free Quiz on Indian Captive: The Story of Mary Jemison by Lois Lenski.

Mary Jemison, called by her nickname Molly, is a young girl of 12 in this novel. She lives in Marsh Creek Hollow, Pennsylvania, with her parents, Thomas and Jane, as well as her older brothers, John and Tom, her older sister, Betsy, and two younger brothers, Matthew and Robert. Just before it is time to plant corn for the year, the Jemison family and some close neighbors are attacked by Indians. Although John and Tom escape, the neighbors and the rest of her family are taken captive by the Seneca warriors. Because there are too many people to keep as prisoners and to easily run from the attempted rescue by the pioneer community, only Molly and the neighbor boy, Davy Wheelock, are actually taken captive. Unbeknownst to her until later in her life, the remainder of her family is killed, and their home is burned down.

The story describes first the scary and difficult journey Molly takes with her captors. Due to treacherous weather and physical demands of fast travel, Molly may not have survived without the help of an old Indian named Shagbark who kept her safe and sometimes carried her on the trip. Along the way, they are joined by another group of warriors who also bring a captive, a young man named Nicholas Porter, who has been taken from Piney Mountain, not far from Molly’s home in March Creek Hollow. Her first major stop on this journey is at Fort Duquesne where the French and natives are set up to fight the English for the land and where the captives are to be traded in a bargain. The two male captives, Davy and Nicholas, are given to the Frenchmen, while Molly is taken by two Indian women who led her to a canoe. They give her fresh clothes and take her to their home, Seneca Town. There, she is adopted into the tribe as a replacement for the dead son of one of the families.

In Seneca Town, Molly learns that the two women who brought her there are to be her new sisters, Squirrel Woman and Shining Star. Her new mother’s name is Red Bird, and her father is Swift Water. She has a hard time adjusting to their way of life. She doesn’t like their food which is boiled corn-pone cakes, not roasted. Their food is bland and without salt. She does not understand their language, and they do not speak English. As a matter of fact, the grumpy sister, Squirrel Woman, gets angry every time Molly, speaks English at all. She is shown chores to do, but refuses to work as they wish. A young Indian boy, Little Turtle, takes pity on Molly and tries to watch out for her and show her the ropes. He tries to teach her their language. Between Little Turtle and just listening to orders with hand motions, Molly eventually learns to speak their language.

Little Turtle is so moved by Molly’s grief over being away from her family that he asks the chief, Chief Standing Pine, if he would consider setting her free. He, of course, says no, but Molly is happy to learn that the old man who helped her on her journey, Shagbark, is actually Little Turtle’s grandfather and lives in the village. As he tried to comfort her physical difficulties on the journey, he tries to put her at ease and help her settle into her new community. Little Turtle also continues to be her friend and tries to cheer her up all the time.

Although Molly is given a variety of jobs throughout the story, her biggest duty is to take care of Shining Star’s baby boy, Blue Jay. She carries him in a traditional way on her back. When she is at a place where she needs to work, she hangs him from a tree limb to swing and sway in the breeze. Several times when she messes up the work, Squirrel Woman gets angry and punishes her, and Molly runs off to cry. Raising corn is probably one of the most important tasks in the tribe. When Molly is chastised, spills the corn seed, and runs away for the afternoon, she is sent to bed with no supper. Eventually, she learns that to eat in this family, one must work for it.

When Molly makes a return trip with her sisters to Fort Duquesne to trade goods and to see Good Hunter and Gray Wolf, their visiting brothers, off to their home in Genesee Town by the Great Falling Waters, Molly sneaks away from where she is told to stand, so she can see if peaches are blooming on the tree. She is spotted by English speaking white people who take her into their building, begin to ask her questions, and feel sorry for her. When her sisters see this, they snatch her away from these people with Blue Jay still strapped to her back. Of course, Squirrel Woman is furious. The sisters know that the white people will try to take Molly away, so they all follow their brothers to their home where, eventually, all of the tribe ends up. This trip is very hard on Molly who arrives in the town deathly ill. She is taken care of by Earth Woman who is known among the Seneca Indians for her skills in dealing with all forms of sickness. Slowly, she is nursed back to health.

Earth Woman is good for Molly in many ways. She lives alone and has a lot of time to devote to Molly. She introduces Molly to Beaver Girl, a child of Molly’s age whom Earth Woman has taught to make traditional clay pots and who wants to befriend Molly. She teaches her wise saying and much about the traditions of their culture. Molly is here when another white-faced person is brought to the town, a young man named Josiah Johnson. He is renamed Running Deer after he runs the gauntlet from the river to the building through two lines of the tribe’s people throwing food, beating, and even cutting him with knives and tomahawks. He is given to Earth Woman to replace her dead son. Earth Woman and Molly are both happy with him, until he uses his canoe to escape, never to be seen again.

Throughout her stay in Genesee Town, Molly is treated well. She becomes very close to her sister, Shining Star, and her baby, Blue Jay, Little Turtle, Earth Woman, and Beaver Girl. She also becomes very friendly with all of the children in the town. Little Turtle earns his new manly name of Turkey Feather after proving himself to be a capable hunter. He remains a loyal and true friend to Molly.

Twice she sees Old Fallenash, the white trader who used to trade with her father. The first time, he is there to trade goods with the tribe, and the second time he is there to tell Molly that he found out what happened to her family, that he believes she’s in the best place she can be, and that she should decide to stay with the Seneca tribe and be happy.

When Englishmen in red coats come first to ask the chief of Genesee Town, Chief Burning Sky, for help fighting the French, Captain Morgan meets Molly and believes she should be with white people. Later, when he visits again, he asks to trade gold for Molly’s release to live with him in the white community. The chief leaves the decision to Molly. He will allow her to go if she still wants to or will defend her right to stay if she’d prefer. Although Molly has longed to go home and then longed merely to be with white families, she has come to love her new family, her new way of life, and all that she has learned. Her decision is to stay with the Seneca people.

More summaries and resources for teaching or studying Indian Captive: The Story of Mary Jemison.