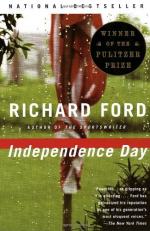 Independence Day takes place in the fictional town of Haddam, New Jersey, as well as in upstate New York and Connecticut during the year 1988. The main character, Frank Bascombe, is a middle-aged divorced realtor. The novel occurs over Fourth of July weekend and Frank struggles to sell a house to the Markhams before embarking on a weekend getaway.

He visits his girlfriend on the Jersey Shore first, and then heads to Connecticut to get his son Paul. Fifteen-year-old Paul is troubled and has recently gotten into trouble for shoplifting. Paul lives with Frank’s ex-wife, Ann, and her second husband, Charley. Bascombe and Paul share a commonality in that they both dislike Charley. Frank hopes to help the troubled teen by connecting with him during their weekend to the Basketball and Baseball Halls of Fame in New York. Their trip is interrupted when Paul is involved in an unexpected incident.

The weekend trip allows Bascombe to partake in a new outlook of his life as he coaches his son to become an independent civilized young man. Frank learns the importance of connections and the complexity of independence itself.