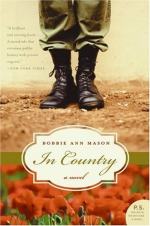 This book is written in third person limited point of view from Sam’s perspective. Throughout the book, readers are shown Sam’s perspective: what she’s thinking and doing, what she notices about the world around her. All actions and conversations are interpreted through her character.

This book is set in Hopewell, Kentucky an economically depressed area in the mid-80’s. Though many characters say that Hopewell is always fifteen years behind the rest of the country, Sam isn’t. She listens to Michael Jackson and Bruce Springsteen, she eats conventional junk food that would have been popular in the mid-eighties and she also demonstrates progressive political beliefs.

The language in the book represents the diction and syntax of a lower economic class in the south in the mid-80’s. Some of the references to the war and popular culture...