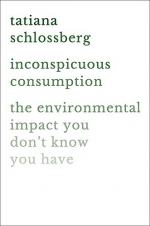 Tatiana Schlossberg
This Study Guide consists of approximately 34 pages of chapter summaries, quotes, character analysis, themes, and more - everything you need to sharpen your knowledge of Inconspicuous Consumption.

The following version of this book was used to create the guide: Schlossberg, Tatiana. Inconspicuous Consumption: The Environmental Impact You Don't Know You Have. Grand Central Publishing, Hachette Book Group, Inc., 2019.

Tatiana Schlossberg divides Inconspicuous Consumption: The Environmental Impact You Don't Know You Have, into four overarching sections: "Technology and the Internet," "Food," "Fashion," each one comprised of smaller subsections.

In "Technology and the Internet," Schlossberg examines the component parts of the tech and data world. She explores the history of telecommunication companies, as well as powerful and familiar data companies like Google, Apple, Amazon, and Facebook. Her studies revealed, not only that these companies house their servers in remote areas to save on energy costs, but they have been known for their dangerous and toxic practices. After looking at these larger entities, Schlossberg then examines personal device use, and the amounts of energy required to operate televisions, laptops, and cell phones. The energy and electricity required to use these devices, however, is not their only issue. Rather, familiar products are comprised of rare chemical compounds and natural resources, those which are dangerous to mine and hazardous to throw away.

In "Food," Schlossberg examines agricultural practices, food shipping costs, food waste trends, and the complicated implications of growing and buying local and organic. Schlossberg presents agricultural histories, particularly those involving corn, the most environmentally taxing agricultural product worldwide. Corn has led to the destruction of biodiverse regions, left land vulnerable to dangerous weather patterns, destabilized soil, and increased threats of flooding and nitrogen spillover. Schlossberg also says that most food in the US is imported. While these sourcing patterns increase shipping costs and air pollution, the energy expended in transportation is less than that required to grow the products locally. The food waste statistics Schlossberg presents are so high, she theorizes, because of issues including, consumer aesthetic expectations or deceptive expiration dates. The more food that is wasted, the more must be grown. While growing organic seems a fix to some agricultural pollution issues, Schlossberg suggests that organic farming systems are not efficient enough to support growing populations.

In "Fashion," Schlossberg moves inside the opaque inner-workings of the fashion industry. While the industry believes its customers should demand more sustainable practices, it also refuses to inform consumers of their products' sources or their business models. Schlossberg then sets out to demystify these processes. She explores the history and energy-sucking production of denim, the hazardous pollutants caused by athleisure, and the deforestation effected by rayon-production. In the final subsection of "Fashion," Schlossberg moves to the Gobi Desert and the production of cashmere. The goats raised to produce the expensive and desirable product have destroyed all natural grasslands in eastern Mongolia; the resulting dust continues to contribute to air pollution in urban areas.

In "Fuel," Schlossberg looks at the environmental effects of coal ash, wood pellet production, air freight, air-conditioning, and car and truck travel. Pollution caused by each of these dynamics is largely attributable to big business or utility companies, many of which are unregulated by government legislature. Coal ash has overflowed into lakes and rivers, and settled at the bottom of the water. Black carbon from oceanic shipping, and other forms of transport, has drastically contributed to the melting of polar ice caps.

In the pages of her conclusion, Schlossberg underscores her belief that because climate change has been collective, so humankind's movement towards remediation must also be collective. She encourages her reader to interrogate every facet of her world, and to elect politicians who are eager to protect the wellbeing of the planet.

More summaries and resources for teaching or studying Inconspicuous Consumption.