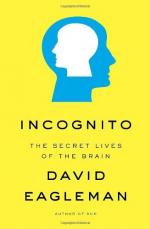 Plot Summary
+Chapters Summary and Analysis
Chapter 1 There's Someone In My Head, But It's Not Me
Chapter 2 The Testimony of the Senses: What Is Experience Really Like?
Chapter 3 Mind: The Gap
Chapter 4 The Kinds of Thoughts That Are Thinkable
Chapter 5 The Brain Is a Team of Rivals
Chapter 6 Why Blameworthiness Is the Wrong Question
Chapter 7 Life After the Monarchy
Free Quiz
Characters
Objects/Places
Themes
Style
Quotes
Topics for Discussion
Order our Incognito: The Secret Lives of the Brain Study Guide

Incognito: The Secret Lives of the Brain Summary & Study Guide

David Eagleman
This Study Guide consists of approximately 28 pages of chapter summaries, quotes, character analysis, themes, and more - everything you need to sharpen your knowledge of Incognito.

Incognito: The Secret Lives of the Brain Summary & Study Guide includes comprehensive information and analysis to help you understand the book. This study guide contains the following sections:

This detailed literature summary also contains Topics for Discussion and a Free Quiz on Incognito: The Secret Lives of the Brain by David Eagleman.

In Incognito, David Eagleman, a neuroscientist, presents his argument that the American criminal justice system should integrate current research in brain science into sentencing guidelines. Assigning blame for criminal acts is complicated by the fact that our actions are dictated to a great extent by our unconscious minds, Eagleman claims. He proposes that rather than sentencing criminals based on how culpable they appear to a judge or jury, sentencing should be based on a person's potential for reforming their behavior based on neurological factors.

The conscious mind represents only a small part of our brain activity and function, Eagleman argues, and he presents the results of a large number of experiments and studies that support his assertion. Many of these experiments illustrate what happens to a person's perception or behavior when the brain is altered, either by damage or drugs. These changes in the brain sometimes result in a person acting contrary to their previous personality, revealing, Eagleman claims, that who we "are" is largely a function of unconscious processes of our minds.

Eagleman proposes a model of the brain he calls a "team of rivals." In this model, the brain is really several separate functions that sometimes incline toward opposing behaviors. Eagleman gives as an example a person's possible reaction when offered a sweet dessert. The person may have conflicting impulses to eat the dessert and to avoid eating the dessert because of health concerns. These competing impulses come from the unconscious mind, he argues, and our conscious mind acts as a kind of chief executive that makes the ultimate decision on whether to eat the dessert or not.

The conscious mind can be affected by many factors, however, Eagleman explains, and he provides several examples to support this. Our senses can be affected in many ways, altering our perception of reality. There is evidence that we do not always understand our own motivations, and that we are not capable of consciously knowing where they come from even though we think we may.

The American criminal justice system uses motivation as part of its criteria for punishment, Eagleman explains. A person who kills another to steal their money is deemed more "blameworthy" than someone who kills another while sleepwalking. Eagleman proposes that the actions of both such people can be better understood through neuroscience and that assigning punishment based on "blame" is not an effective way to prevent a person from committing the same crime again. Instead, he proposes, punishment should be based on a person's ability to be rehabilitated through behavioral or medical treatment according to the neurological reasons for their actions.