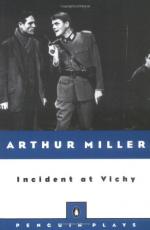 Arthur Miller
This Study Guide consists of approximately 40 pages of chapter summaries, quotes, character analysis, themes, and more - everything you need to sharpen your knowledge of Incident at Vichy.

Incident at Vichy: A Play Summary & Study Guide includes comprehensive information and analysis to help you understand the book. This study guide contains the following sections:

This detailed literature summary also contains Topics for Discussion on Incident at Vichy: A Play by Arthur Miller.

"Incident at Vichy" by Arthur Miller is a one-act play about a group of ten men detained by German officers during World War II upon suspicion of being Jewish. As these men begin to understand why they have been detained, they begin to react with fear and anger, yet none try to escape. "Incident at Vichy" offers a view of why the Nazis were able to perpetrate the Holocaust for so long due to denial and complicity.

After being picked up on the streets of Vichy, France, six men and a young boy wait in a detainment center, wondering why they have been detained. Bayard tries to convince the excitable Lebeau to calm down while Marchand and Monceau insist this is a routine identity check. Still, Lebeau is convinced the Germans will kill them. The Captain of Police, the Professor and two detectives enter with the Old Jew, Leduc and Von Berg. Marchand is interrogated and given a pass to leave. Meanwhile, Bayard tells the others about Jews being transported by railroad car to concentration camps in Poland where they are worked to death. Monceau, an actor, does not believe that the Germans would senselessly kills the Jews because they enjoyed his acting so much when he played in Germany, but Von Berg, an Austrian prince, insists that many of the Nazis were once cultivated people. As the prisoners nervously examine their papers, Monceau insists they will be fine as long as their papers are in order.

Bayard, a Communist, becomes irritated by Lebeau's panic and insists that they cannot react personally to this because they are a part of history. Ferrand, the cafe proprietor, brings coffee to the officers, and upon leaving the office, he tells the waiter that he overheard the detectives talk of burning people in furnaces. In response, Leduc suggests that three men could overpower the one guard at the door, but no one is willing to attempt an escape; complicity offers a chance of release while rebellion seems to ensure destruction. During this conversation, the gypsy and Bayard are both interrogated, but neither of them return. Monceau refuses to believe that the Germans are burning Jews in furnaces, but Von Berg and Leduc believe that man is truly that atrocious. When the waiter ignores his summons, the Captain drags him into the office and proceeds to beat him. Feeling this position is beneath him, the Major argues with the Professor about their interrogation methods before taking a walk during which questioning ceases pending his return. The boy offers to help Leduc in his escape plan, but Leduc believes it is useless without the aid of Monceau, the only other able-bodied man who still insists the Germans are incapable of this. Leduc and Monceau argue about racial laws while Von Berg tells about the Jewish musicians that were killed in Austria as proof that the Germans would try to exterminate the Jews.

Accepting his fate, the boy asks Von Berg to return his mother's wedding ring which he was trying to pawn for food when he was picked up. As Leduc and the boy decide to escape, the Major returns, intoxicated, and advises them against it. The Major and Leduc argue because Leduc wants the Major to help them escape, but the Major insists it will not matter as he sees a future where human beings are insignificant. Lebeau, Monceau and the boy are all interrogated in turn, but none of them are released. The Old Jew follows this pattern. During this, Leduc asks Von Berg to tell his wife about his arrest, and Von Berg asks to part as friends; however, Leduc refuses until Von Berg accepts his responsibility in this atrocity which stems from his complicity as he has done nothing to change things. The Professor interrogates Von Berg, releasing him with a pass which Von Berg gives to Leduc and insists he go. Leduc flees. The Professor, the Captain and the detectives rush out to search for Leduc while the Major and Von Berg stare at each other without being able to comprehend one another as a new group of detainees is brought in.

More summaries and resources for teaching or studying Incident at Vichy: A Play.

Incident at Vichy: A Play from BookRags. (c)2022 BookRags, Inc. All rights reserved.