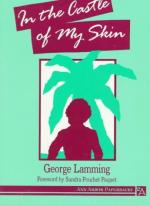 In the Castle of My Skin Summary & Study Guide

George Lamming
This Study Guide consists of approximately 29 pages of chapter summaries, quotes, character analysis, themes, and more - everything you need to sharpen your knowledge of In the Castle of My Skin.

In the Castle of My Skin Summary & Study Guide Description

In the Castle of My Skin Summary & Study Guide includes comprehensive information and analysis to help you understand the book. This study guide contains the following sections:

This detailed literature summary also contains Topics for Discussion on In the Castle of My Skin by George Lamming.

In the Castle of My Skin is an autobiographical account of author George Lamming’s childhood growing up in Barbados. The narrative takes place from the time the narrator, G, is nine to when he is seventeen. The novel begins on the narrator’s ninth birthday, which is marked by heavy rains that cause severe flooding. The narrator’s mother states that these waters are a ‘blessing,’ but the narrator remains unsure.

The novel chronicles the changes that sweep over the island of Barbados within the nine years the novel encompasses. The changes occur when Mr. Slime, one of the schoolteachers, rises to political power. Instead of initiating positive social change, as he promises, the power corrupts Mr. Slime and he reneges on his promise to make the village people of Barbados landowners.

The social hierarchy plays a prominent role in the novel. On the top of the hierarchy, in his castle on the hill, is Mr. Creighton, the white landlord. He owns the land that the villagers live on; they pay him rent to live there. Following Mr. Creighton are the black overseers. They work for the landlord and help keep order in the village. The villagers are at the bottom of this social hierarchy. They have little freedom and live in severe poverty.

While the villagers exist at the bottom of the hierarchy, they do not see themselves as enslaved. Instead, the villagers have a sense of freedom that comes from their allegiance to the English Empire. However, their lack of resources and agency leaves the villagers at the whims of both man and nature.

The social hierarchy is enforced through those in power. In the beginning, Mr. Creighton holds the power. This man has a conflicted sense of responsibility. On one hand, Mr. Creighton wants to do what is right for the native people. On the other hand, he remains shackled to an economic system that places monetary value above human worth. The ex-school teacher-turned politician, Mr. Slime, overthrows Mr. Creighton’s power. When Mr. Slime accedes to power, he promises to make the native people landowners of their island. However, greed and power lead to Mr. Slime’s corruption. Ultimately, he succeeds Mr. Creighton as landowner, but does not bless the people of Barbados with their land. Instead, he greedily hordes the land, evicts some of the natives, and charges the rest exuberant amounts of interest on their rented property.

This hierarchy marks rigid boundaries within the novel, which G. attempts to transcend by attending high school and gaining an education. While his education allows him to leave the island, he does not gain the sense of identity necessary for obtaining one’s freedom. The narrator’s friend, Trumper, returns from America at the end of the novel. He explains that, in order to achieve identity, the narrator must break himself from Barbados and seek an understanding of his race.

The novel ends with the hope that the narrator will leave Barbados and search for his identity, though with the sobering knowledge that the remainder of the villagers will remain confined to the social boundaries that mark their lives. They will not transcend the hierarchy that enslaves them.

More summaries and resources for teaching or studying In the Castle of My Skin.

In the Castle of My Skin from BookRags. (c)2022 BookRags, Inc. All rights reserved.