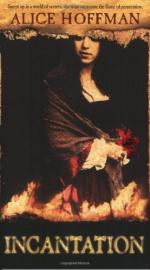 Related Topics
The Museum of Extraordinary Things
The Dovekeepers
The Marriage of Opposites
Faithful: A Novel
The Rules of Magic
The World That We Knew
The Book of Magic

Alice Hoffman
This Study Guide consists of approximately 18 pages of chapter summaries, quotes, character analysis, themes, and more - everything you need to sharpen your knowledge of Incantation.

"Incantation" is a young adult novel written by Alice Hoffman that details the life and experiences of sixteen year-old Estrella di Madrigal during the Spanish Inquisition.

When the novel begins, Estrella is like any ordinary teenage girl: she has a best friend named Catalina, loves her family, and loves the peaceful town and countryside where she lives. She dreams of being lifelong friends with Catalina, and looks forward to raising a family of her own. But one day, all of that changes. In the town plaza, a fire rages, fed by the burning books of Jews, now forbidden by law. Estrella's mother, Abra, reminds Estrella that all people are in the end, the same, and will all go to the same green garden.

As the novel progresses, Estrella's friendship with Catalina becomes strained over Andres, Catalina's cousin, whom she intends to marry. Andres, however, only has eyes for Estrella. At the same time, the government sends out a call for citizens to report false Christians. Catalina and her mother turn in their neighbors, and later loot their home. This causes severe shock in Estrella, who grows ever more distant from Catalina.

More summaries and resources for teaching or studying Incantation.

Incantation from Gale. ©2005-2006 Thomson Gale, a part of the Thomson Corporation. All rights reserved.