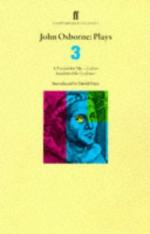 Liz Eaves is having an affair with Bill Maitland. She appears at the end of the play, worried about Bill's mental state but willing to confront him about his repeated broken promises to her. Although she tries to get him to face up to his bad behavior, she shows patience and concern, repeatedly telling him that she loves him. When she cannot get Bill to commit to their relationship, she decides to leave him.

Wally Hudson, Bill's patient office manager, tries to offer sound advice to Bill but it is ignored. His sense of responsibility and loyalty emerges as he continually takes cases that Bill cannot handle. His loyalty, however, has its limits. Realizing that Bill is being investigated for misconduct and that he is losing his grip on reality, Hudson decides to think of his own future and accepts another position.