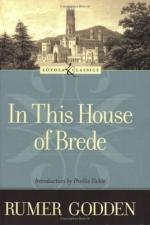 In This House of Brede Summary & Study Guide

Rumer Godden
This Study Guide consists of approximately 32 pages of chapter summaries, quotes, character analysis, themes, and more - everything you need to sharpen your knowledge of In This House of Brede.

In This House of Brede Summary & Study Guide Description

In This House of Brede Summary & Study Guide includes comprehensive information and analysis to help you understand the book. This study guide contains the following sections:

This detailed literature summary also contains Topics for Discussion on In This House of Brede by Rumer Godden.

The novel In This House of Brede follows the journey of successful business woman Philippa Talbot as she leaves her life to become a nun at Brede, a Benedictine monastery. Although she joins the monastery at a more advanced age than most nuns, Philippa is able to use the life experiences she has had to help solve problems and elicit change at her monastery. Philippa ultimately lets go of the hurt and unforgiveness associated with her most painful experience, the death of her son, and is appointed prioress of a Japanese abbey. In the final chapters of the book, she is able to give her whole self to God, the ultimate challenge for any Christian.

Despite her own fears and the discouragement of friends and coworkers Philippa goes through with her intention to join the House of Brede. Four years after she has entered the monastery, Abbess Hester Cunningham Proctor dies, leaving this spot open for election. Catherine Ismay is elected abbess. She is immediately met with troubles as she learns Hester had commissioned an expensive stone work project depending on the dowry of a nun who has just left the abbey, taking her money with her. By what might be defined as divine intervention the cross worn by the abbey's abbess is accidentally broken to reveal a large ruby. This ruby is sold and the proceeds cover the debt owed by the church.

Along with the other nuns Philippa has many battles she must win before she can be fully used by God. The first of these battles involves the death of Philippa's young son Keith. A group of Japanese postulants have come to Brede and because she is familiar with Japanese Philippa is the obvious choice for zelatrix, or teacher, of these new nuns. If she is appointed zelatrix, however, Philippa must also teach Kate Farren a nun who is the daughter of Keith's nanny. Because the girl reminds Philippa so much of the hurt she felt when her son died Philippa begs to be excused from the position. Her unwillingness to be zelatrix means the Japanese postulants must wait a year to come, an option no one likes.

Again as if by divine intervention Philippa and Kate are isolated together with chicken pox. It is through this experience that Philippa is able to put away her aversion to Kate and accept the position as zelatrix.

Philippa's final test comes when Dame Colette the nun chosen to be prioress at the Japanese monastery dies suddenly. It is obvious Philippa is next in line for the position but again she falters. It takes a pep talk from Dame Agnes to make Philippa realize she must give all of herself to God. This includes going where He wishes and doing His wishes. Philippa accepts the position as prioress and in the end of the book waves good bye to her friends as she boards the plane to Japan.

More summaries and resources for teaching or studying In This House of Brede.

In This House of Brede from BookRags. (c)2022 BookRags, Inc. All rights reserved.