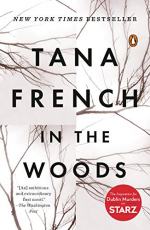 In the Woods Summary & Study Guide

Tana French
This Study Guide consists of approximately 75 pages of chapter summaries, quotes, character analysis, themes, and more - everything you need to sharpen your knowledge of In the Woods.

In the Woods Summary & Study Guide includes comprehensive information and analysis to help you understand the book. This study guide contains the following sections:

This detailed literature summary also contains Quotes and a Free Quiz on In the Woods by Tana French.

The following version of the novel was used to create this study guide: French, Tana. In The Woods. Penguin Books, May 17, 2007. Kindle.

In the psychological thriller In The Woods by Tana French, Adam “Rob” Robert Ryan, a detective with the Dublin Murder Squad, could not wait to get his first major murder case. When he and his partner Cassandra “Cassie” Maddox were assigned a case, Rob was dismayed to learn that the victim had been killed in the Knocknaree woods, the place where Rob had grown up playing with his childhood friends, Jamie and Peter. Rob had not been there since Jamie and Peter disappeared and were never found. Even though Rob knew that he should not get involved in the case, he swore to himself and to Cassie that he would be able to handle the stress of the present murder case as well as the mysteries of the past.

In 1984, the police were called when Rob, then known as Adam Ryan, and his friends Jamie and Peter did not return one night from playing in the woods near Knocknaree. Rob was found by police, so scared he was catatonic. He did not speak for two weeks. Jamie and Peter were never found. When Rob did start talking, he remembered nothing about what had happened. After Rob’s parents sent him off to boarding school, they moved from Knocknaree.

More than twenty years later, when Rob returned to Knocknaree as a detective with the Dublin Murder Squad, he discovered that much of the woods in which he had played with Jamie and Peter was the site of an archaeological dig. Artifacts were being uncovered that indicated the area had been a sacred religious site for pre-Christians during the Bronze Age. The body of Katharine “Katy” Devlin was found on what was believed to be a sacrificial altar, leading some to believe that her death was connected to Satan worship. Though Rob never openly admitted it, he hoped that Katy’s death would be connected to the disappearance of Jamie and Peter so he would know what happened to his friends. Rob demonstrated his wish that the cases were related when he told Cassie that the barrette found by the stone belonged to Jamie. He even checked back in the files to be sure the descriptions matched.

Rob and Cassie’s supervisor assigned a third detective, Sam O’Reilly, to help them with the case. The three soon developed a friendship as well as a habit of meeting at Cassie’s apartment each evening for dinner as they went through the evidence they had uncovered. One weekend, Rob spent the night in the Knocknaree woods, hoping that it would jog his memory about what happened to Jamie and Peter. Rob remembered the events up to a point but was so frightened by what he was remembering that he panicked and ran. He called Cassie to come and pick him up because he was too shaky to drive. Rob spent the night at Cassie’s apartment that night. Without intending to, they had sex, an encounter that caused Rob to start avoiding Cassie. He did not believe he was capable of having a relationship, but Cassie told him she did not want a relationship. She just wanted things to go back to the way they were.

A break in the case led to the arrest of Damien Donnelly, an archaeologist who did not appear able to hurt anyone. He described how he had killed Katy, a description that matched how she had died but claimed that he did not remember why he killed her. Further investigation connected Damien to Rosalind, Katy’s older sister. Damien claimed that Katy told her father lies about Rosalind and Jessica to get them in trouble. He said that Rosalind described to him how her father had broken her skull when he hit her with a poker. Damien claimed it had been his idea to kill Katy, but Cassie wanted to get the truth out of Rosalind, whom Cassie believed was a psychopath who had orchestrated the entire murder.

Based on Rob’s claim that Rosalind was 18, Cassie wore a wire and lied to Rosalind about an affair with Rob. Rosalind had already indicated she believed Cassie and Rob were sleeping together and threatened to tell the police. By putting herself in a position that gave Rosalind power, Cassie believed she could get the truth about Katy’s death. Rosalind wound up describing to Cassie exactly why she had involved Damien in the scheme to kill Katy and how she had used detergent to make Katy sick for months before Katy caught on to what was happening. Cassie was stressed as she had to lie to Rosalind and appeared almost in shock after Rosalind attacked her as she tried to put handcuffs on her.

Cassie and Sam both lashed out at Rob when it was discovered that Rob had not accounted for the month in which Rosalind was born when he calculated her age. She was a few months shy of being 18. As a result, none of her testimony was admissible. Damien was found guilty of murder and sentenced to life in prison. Rosalind was placed on a suspended jail sentence when she pleaded guilty to a charge of conspiracy. After Rosalind’s guilty plea, Simone Cameron located Kay’s diary in her dance studio. In the diary, Katy outlined how Rosalind had been making her sick by putting detergent in her juice. Rob was demoted to a pool detective while Cassie transferred to the domestic violence squad. Rob later heard that Cassie and Sam had gotten married.

More summaries and resources for teaching or studying In the Woods.

In the Woods from BookRags. (c)2022 BookRags, Inc. All rights reserved.