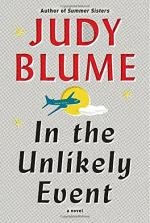 Judy Blume Writing Styles in In the Unlikely Event

Judy Blume tells her novel “In the Unlikely Event” from the third-person limited-omniscient past-tense point of view; and the third-person limited-omniscient present-tense point of view. This is done for a few different reasons. The first and final sections of the novel are told in the present-tense point of view to distinguish them from the four parts between them which occur 35 years before, and to make it feel as if the reader is in the present time (being 1987). The four parts between are told in the past-tense, to distinguish the events of 1951-52 from the present. The limited-omniscient aspect of both present and past-tense parts adds a sense of realism and suspense to the novel, as readers do not know when the next airplane will crash, or how the characters of the novel will respond to those events.