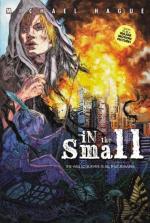 In the Small Summary & Study Guide

Michael Hague
This Study Guide consists of approximately 24 pages of chapter summaries, quotes, character analysis, themes, and more - everything you need to sharpen your knowledge of In the Small.

In the Small Summary & Study Guide includes comprehensive information and analysis to help you understand the book. This study guide contains the following sections:

This detailed literature summary also contains Topics for Discussion on In the Small by Michael Hague.

"In the Small" by Michael Hague with Devon Hague is a graphic novel that tells the story of a horrid attack on mankind that leaves its future in question. The story begins on a sunny day in September in the downtown section of a large American city with soaring skyscrapers and crowded streets. Moments later a strange blue light encompasses the city. The light penetrates into every corner of the world, down to the bottom of the sea and all the way to the earth's core.

The light disappears after just a short period of time. The birds begin to sing again and the cows resume grazing in the pastures. The only creatures that seems to be impacted by the light are the humans. They are reduced to just one-twelfth their size. Also impacted are the machinery and inventions of men. Helicopters and airplanes fall from the skies. Trains and trucks cease to function.

The human's clothes literally fall off of them because of their newly diminished size. The humans do not seem to be impacted in any other way but their new stature causes them many problems. Just prior to the moment when the light hits, Mouse Willow, a young intern who works at his father's office in a downtown skyscraper, had passed out on the floor. Mouse had become overcome because he had a premonition of the impending tragedy. His father believes him because he has had such visions all his young life and they had always proven to be accurate. When the blue light strikes, everything is thrown into chaos.

Bob Willow, Mouse's father, is stuck on the top of his desk and has to whinny down a phone line to get to the floor. All the humans are naked because their clothes fell off of their bodies. Mouse is a natural leader, and his instincts tell him to lead the group outside if they are to survive. At the same time, back at the Willow home, Mouse's mother, sister, Beatrix, and his grandfather have all been miniaturized. Beatrix has to rescue her grandfather from the garden where he was working. A normally harmless garter snake is about to attack him until Beatrix is able to stab the snake and save her grandfather.

The two youngsters lead survivors on treks to find their way to safety. Beatrix helps a neighbor find her children at school. And Mouse leads what becomes an army of survivors to safety. They both head back to the Willow house where the family greenhouse is going to be used to restart civilization. The two youngsters have many obstacles, tragedies and challenges to overcome on their way to safety. They have to fight animals like house cats, common spiders, rats, and snakes that are now menacing and monstrous beasts. Mouse and another survivor he meets along the way both have the ability to foretell the future. Both seem to be guided by the hand of God. They are also warned of a future that somehow lies mysteriously in the past and to beware of demons that walk the earth.

More summaries and resources for teaching or studying In the Small.

In the Small from BookRags. (c)2022 BookRags, Inc. All rights reserved.