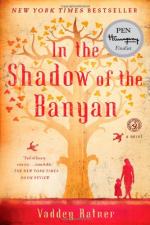 Related Topics
Music of the Ghosts

In the Shadow of the Banyan: A Novel Summary & Study Guide

Vaddey Ratner
This Study Guide consists of approximately 62 pages of chapter summaries, quotes, character analysis, themes, and more - everything you need to sharpen your knowledge of In the Shadow of the Banyan.

In the Shadow of the Banyan: A Novel Summary & Study Guide Description

In the Shadow of the Banyan: A Novel Summary & Study Guide includes comprehensive information and analysis to help you understand the book. This study guide contains the following sections:

This detailed literature summary also contains Quotes and a Free Quiz on In the Shadow of the Banyan: A Novel by Vaddey Ratner.

The following version of this book was used to create this study guide: Ratner. Vaddey. In the Shadow of the Banyan. Simon & Schuster, 2012.

Seven-year-old Raami was a privileged child in the Cambodian city of Phnom Penh in 1975. Her father Ayuravann Sisowath was a prince descended from a king; her mother Aana was a beauty; and Raami lived in a palace. Raami’s only impediments were her difficulty walking, as she had survived polio as a young child, and her jealousy of her toddler sister, Radana, who did not have any physical problem. As the novel begins, the family was celebrating the Khmer New Year holiday with a lavish celebration, satisfied that the fighting in the countryside had come to an end. The girls’ nanny, Milk Mother, their gardener, Old Boy, and their maid, Om Bao, were helping prepare for the festivities.

Papa’s sister Tata and his mother, Grandmother Queen, arrived for the celebration. Papa, an enlightened man and a poet, somewhat supported the Communists -- called the Khmer Rouge, or "Red Khmers" -- because of the class inequality he perceived in Cambodia. Soon after the celebration, the Phnom Penh residents welcomed the Revolutionary soldiers to the city. Not long after, a Khmer soldier told the family they must leave the city. Confused and disoriented, the family left their home, along with hundreds of thousands of other city dwellers, for places unknown. After a long day of traveling, they arrived in their weekend home, Mango Corner, where they met up with Ayuravann’s brother, Big Uncle or Arun, Arun’s wife, Auntie India, and the couple's twin sons.

However, the Sisowaths' reprieve from the regime did not last for long. The Khmer Rouge forced them on a long journey across water, jungle, and farmland to the grounds of a former Buddhist temple, where they were forced to live in a classroom along with hundreds of other displaced citizens. Still, the Sisowaths were unclear about the regime's intentions. In the temple, they came to learn that the goals of the regime were to separate families and weed out royal and educated citizens. Despite her family's conclusion, though, Raami did not understand the implications of telling the truth about her father's name. So, when asked her father's name and title, Raami told the truth about her father's name and title, sentencing Ayuravann to almost certain death.

After Ayuravann was transported away -- his fate ambiguous -- Raami, Radana, and Aana were taken into one caravan, while Grandmother Queen, Arun, India, and the boys were taken elsewhere. Raami and her mother and sister were taken to the countryside, where they were “given” to an elderly, childless couple named Mae and Pok. Mae and Pok were kind to the family, but soon after their arrival, Radana contracted malaria after a mosquito bite and died. Not long after Radana's death, local Revolutionary officials realized Aana was educated and of upper-class birth, and they sent Raami and Aana away from Mae and Pok.

In a forest clearing awaiting their fate, Aana and Raami met up Big Uncle and Grandmother Queen. In error, this group of "undesirables" was mistakenly shipped to another settlement, a less-harsh settlement than where they were supposed to go. In Ksach, Big Uncle and Aana worked, while Raami was sent to school. Grandmother Queen became increasingly disoriented. One night, Raami overheard her uncle telling her mother about how their other family members had died. He had been taken away by the Revolutionaries on charges that he was a member of the CIA. They tried to “reeducate” Arun by viciously beating him, but he did not die. While he was away from the family's dwelling, however, Tata announced their royal status, and the regime hanged India, the twins, and Tata in their home. Grandmother Queen was left to live — left alone for days with the bodies while Arun was away — as was Arun, now reeducated.

This kind and reasonable Revolutionary settlement was not to last, however. The more-lenient regime members were killed by radical Revolutionary soldiers who also murdered anyone who did not support the cause. Big Uncle and Aana were assigned to a work camp away from the village, while Raami was left to care for her grandmother. Grandmother Queen died not long after her son left.

After her grandmother's death, Raami was sent to the work camp with her mother and uncle. The work camp's goal was to build a tall embankment to keep the river from flooding and demonstrate the prowess of Cambodians to the Vietnamese with whom they were at war. The work was constant and backbreaking. Many died because of the poor conditions and limited food. Raami herself was near death. When the rains came, several children were killed when the embankment collapsed on top of them. Arun buried these children, and distraught about all of the Khmer Rouge's destruction, hanged himself in his bunker. Aana and Raami still tried to survive, however, trading what they could for sustenance.

Four years after the ordeal began — in 1979 — Khmer soldiers fled into the forest to escape the incoming Vietnamese army. Raami and Aana waited in the camp, taking food and gold, until a Vietnamese soldier in a vehicle offered to take them across the country. Aana decided they should go to Thailand, where another Communist regime -- the Vietnamese -- was about to take power. She gave Raami a last letter from her father, which Raami read while they were traveling through a forest on an dangerous attempt to cross the Thai border. When Aana and Raami crossed the border, they were rescued by a French Red Cross worker who picked them up in a helicopter. In the helicopter, Raami and her mother saw Cambodia one last time.

More summaries and resources for teaching or studying In the Shadow of the Banyan: A Novel.

In the Shadow of the Banyan: A Novel from BookRags. (c)2022 BookRags, Inc. All rights reserved.