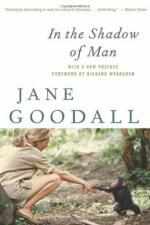 In the Shadow of Man Summary & Study Guide

In the Shadow of Man Summary & Study Guide Description

In the Shadow of Man Summary & Study Guide includes comprehensive information and analysis to help you understand the book. This study guide contains the following sections:

This detailed literature summary also contains Topics for Discussion on In the Shadow of Man by Jane Goodall.

In the Shadow of Man gives the back story to Jane Goodall's famous study of the chimpanzee. Goodall has been known across the world for decades as the scientist who first studied the chimpanzee in his natural habitat; she has won numerous awards and produced a slew of books and documentaries. But within the pages of In the Shadow of Man, the reader hears Goodall tell her story from her own perspective and from the very beginning.

In the first two chapters, Goodall discusses her fascination with animals and the chimpanzee from an early age, her decision as an adolescent to study animals in Africa and her attempts to save money to finance a trip herself. Goodall was lucky enough to study with L. Leakey, who secured her funding throughout much of her early research. She describes the difficulties of living in Africa, not only physically but socially. In her first few weeks, Goodall is lucky enough to make some of her first observations of the chimpanzee community she would come to know so well; this discoverey comprises chapter three.

Chapters four and five discuss Goodall's attempts to learn more about the chimps and her difficulties navigating camp life and the rainy season. In chapter six, Goodall is lucky enough to have some of the chimps come to camp. By this time, Goodall is getting to know some of the chimps and has named them; Flo, David Graybeard, Goliath, and William make their first appearances. Chapter seven covers the sexual habits of chimpanzees, particularly those of Flo, a senior female gorilla.

Chapter eight discusses the feeding station that Goodall and Hugo van Lawick, her photographer and eventual husband, set up to draw the chimps into an area where they could be regularly studied. The benefits of the feeding station allow Goodall to make detailed observations of the chimpanzee community, particularly of Flo's family. Her discussion of Flo's family fills chapter nine. In chapter ten, Goodall outlines the organization of the community social hierarchy.

The last three chapters take a different tack. Chapter nineteen discusses the various similarities between humans and chimpanzees, and chapter twenty exhorts the reader to fight for more humane treatment of chimpanzees. In chapter twenty-one, Goodall returns both in 1970 and 1987 to describe the progress of her research and the research of her center.

In the Shadow of Man from BookRags. (c)2022 BookRags, Inc. All rights reserved.