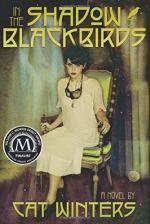 Related Topics
The Cure for Dreaming

In the Shadow of Blackbirds Summary & Study Guide

Cat Winters
This Study Guide consists of approximately 48 pages of chapter summaries, quotes, character analysis, themes, and more - everything you need to sharpen your knowledge of In the Shadow of Blackbirds.

In the Shadow of Blackbirds Summary & Study Guide Description

In the Shadow of Blackbirds Summary & Study Guide includes comprehensive information and analysis to help you understand the book. This study guide contains the following sections:

This detailed literature summary also contains Quotes and a Free Quiz on In the Shadow of Blackbirds by Cat Winters.

It is October, 1918, and 16-year-old Mary Shelley Black is sent from her home in Portland, Oregon, to live with her widowed Aunt Eva in San Diego. Mary Shelley’s father has been arrested for treason for helping young men avoid the draft. The last days of World War I drag on and the Spanish Influenza is claiming thousands of lives all over the world.

Mary Shelley has been in love with a boy named Stephen Embers since they were children in Portland, and she is happy that she will be able to see Stephen again because his family now lives on Coronado, the island connected by a bridge to San Diego. Mary Shelley and Stephen renew their love when Aunt Eva takes her to the Embers’ home for a visit. Mary Shelley is shocked to learn that Stephen has enlisted in the army and will be leaving immediately. Life is challenging for Mary Shelley and Aunt Eva who try to avoid catching the flu by wearing face masks everywhere and eating lots of onions.

Stephen enlists in the army and dies but soon returns in spirit form to Mary Shelley. Stephen's soul is tormented by blackbirds trying to kill him and he seeks her out to find out what really happened to him so that his soul can be at peace. Stephens half brother, Julius, is a spiritual photographer who preys on the grief of suffering people by manipulating photo portraits to include what he says are images of their dead relatives’ spirits. He even invites Mary Shelley and Aunt Eva to a séance to try to contact Stephen’s spirit.

Mary Shelley is a scientist at heart and tries to methodically solve the problem of Stephen's death against the backdrop of rampant death, seances and fear of influenza. Mary Shelley's love for Stephen pushes her forward until she uncovers the real circumstances of his death. Mary Shelley meets a childhood friend and army comrade of Stephen’s at a Red Cross house and he tells her the real circumstances of Stephen’s death. Stephen had not died in battle in Europe but had come home suffering from post traumatic stress syndrome. In order to cover up what they consider to be a shameful secret, Stephen’s family keeps him locked in his room where he is tied to his bed.

Julius and his accomplice, Aloysius Darning, another fraudulent spirit photographer, want to earn the prize money in a spirit photography contest and end up killing Stephen. Mary Shelley, claiming that she wants to connect with Stephen’s spirit, re-enacts the traumatic event with the help of Julius of Aloysius. Stephen’s spirit also gets involved and they are able to reveal the details of how Stephen was killed in that room.

Aunt Eva is hospitalized with influenza and Mary Shelley soon comes down with it too. They reunite in the hospital. Both women survive bouts of the influenza and a sense of calm returns to the household after Stephen’s spirit is calmed and the threat of influenza wanes. They determine to carry on as the strong women they are.

More summaries and resources for teaching or studying In the Shadow of Blackbirds.

In the Shadow of Blackbirds from BookRags. (c)2021 BookRags, Inc. All rights reserved.