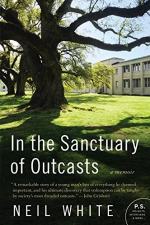 In the Sanctuary of Outcasts Summary & Study Guide

Neil White
This Study Guide consists of approximately 60 pages of chapter summaries, quotes, character analysis, themes, and more - everything you need to sharpen your knowledge of In the Sanctuary of Outcasts.

In the Sanctuary of Outcasts Summary & Study Guide Description

In the Sanctuary of Outcasts Summary & Study Guide includes comprehensive information and analysis to help you understand the book. This study guide contains the following sections:

This detailed literature summary also contains Quotes and a Free Quiz on In the Sanctuary of Outcasts by Neil White.

The following version of the book was used to create this study guide: White, Neil, In the Sanctuary of Outcasts. HarperCollins, New York, New York, 2009. Kindle AZW file.

Neil White appeared to be a successful businessman. He was married to Linda and had two children, Little Neil and Maggie. He and his family lived in Oxford, Mississippi, where he had launched a successful but small newspaper venture. When his expenses outweighed his income, he began “kiting checks” to make up the shortfalls. When he was thousands of dollars in arrears, one of the banks caught on to his scheme and called in their loans. Neil and Linda moved to Gulfport where Neil launched the Coast Magazine, then the Coast Business Journal. He recruited investors and came up with an aggressive five-year plan that would culminate in a publishing empire. When he began facing shortfalls, he again began kiting checks, but the numbers quickly grew into the hundreds of thousands of dollars this time. When a bank auditor discovered what Neil was doing, he was again shut down. This time he faced criminal charges. Neil was sentenced to 18 months in a federal prison and ordered to pay back hundreds of thousands of dollars in restitution and fines.

On the appointed day, Neil arrived at Carville, a federal prison in Louisiana that had once been a sugar plantation. From his waiting place at the guard shack, he saw a man who seemed to have no fingers. Neil asked the guard about the man but was told he would soon understand. While Neil was imagining some sort of accident – perhaps while making license plates – he soon discovered that the man actually had leprosy.

Carville had been a leprosarium – a home for those with leprosy – established about 100 years before Neil's arrival. There were more than 100 people who called Carville home because of the disease, and some had spent most of their lives at Carville. The Department of Prisons had seen the potential for Carville to become a prison despite the current residents. At first, only those with serious health issues were housed at Carville, but that policy quickly changed so there were all sorts of healthy criminals in one wing of the campus while those with leprosy lived in another.

When Neil learned the situation, he was terrified of catching the disease and was horrified by the disfigured people who inhabited the resident wing of the campus. It took only a short time, however, for him to discover that these people had immeasurable grace and fortitude despite having lived out their lives in near isolation, many abandoned by their families and feared by anyone they met outside of Carville. He remained at Carville for almost a year, and he became friends with several of the residents, especially a woman named Ella and a man named Harry. Ella gave Neil advice that he knew would make him a better man and father. Neil knew he had not impacted Ella's life nearly as much as she had impacted his.

When the situation at Carville turned violent, the Department of Prisons had to admit that the campus was simply not set up to contain violent prisoners, especially when the building could not be renovated because of its historical significance. Most of the prisoners were transferred to other prisons or released early. As Neil said good-bye to the few who remained, he knew that he would never have gotten to know any of these people if he had continued on his course toward success in the outside world. He also knew they made him desire to be a better person, and he set out to meet his freedom with that goal in mind.

More summaries and resources for teaching or studying In the Sanctuary of Outcasts.

In the Sanctuary of Outcasts from BookRags. (c)2022 BookRags, Inc. All rights reserved.