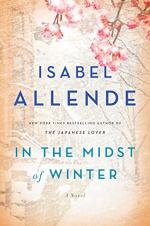 Related Topics
And of Clay Are We Created
Aphrodite
Aphrodite: A Memoir of the Senses
City of the Beasts
Daughter of Fortune

In the Midst of Winter Summary & Study Guide

Isabel Allende
This Study Guide consists of approximately 56 pages of chapter summaries, quotes, character analysis, themes, and more - everything you need to sharpen your knowledge of In the Midst of Winter.

In the Midst of Winter Summary & Study Guide Description

In the Midst of Winter Summary & Study Guide includes comprehensive information and analysis to help you understand the book. This study guide contains the following sections:

This detailed literature summary also contains Quotes and a Free Quiz on In the Midst of Winter by Isabel Allende.

The following version of this book was used to create this study guide: Allende, Isabel (translated by Nick Caistor and Amanda Hopkinson). In the Midst of Winter. Atria Paperback, an imprint of Simon and Schuster, Inc. New York, NY. 2017. Export Edition, October 2017. Substantial sections of the book explore the characters’ pasts: in the Summary, those sections are written in past tense. The action taking place in the characters’ shared present is summarized in present tense.

In the middle of a mid-winter blizzard in New York City, three people are brought together by a combination of bad weather, accidents, and desperation. Those people are lonely, middle-aged academic Richard Bowmaster; visiting Chilean academic Lucia Maraz, also middle aged and living in Richard’s basement; and Evelyn Ortega, an undocumented immigrant working as a nanny for a wealthy American family.

After he accidentally hits the car driven by Evelyn, Richard gives her his contact information in order to start the process of making insurance claims. He is surprised the next day when Evelyn arrives at his door, virtually inarticulate with fear and panic. When he learns that she speaks Spanish, he calls Lucia to come and interpret for him. Eventually, Richard and Lucia learn that Evelyn is afraid because she had been driving the car without permission; that the car’s owner, and her employer, has a violent temper; and that there is a dead body in the car’s trunk. After confirming that there is, in fact, a body in the car (that of a young woman), Richard and Lucia concoct a plan to protect Evelyn from both her employer and from deportation: the three of them will drive north to an isolated cabin that Richard knows of and dispose of both the car and the body. Their journey is made difficult by bad weather and bad roads, Richard’s tendency towards anxiety, and the occasional appearance of police officers ensuring the roads are safe and that traffic is flowing. Eventually, the trio arrives at the cabin and works out exactly how they are going to follow through on their plans.

Intercut with this main plot, there are three subplots, each set in the past and each describing the traumatic histories of the three characters. Lucia grew up in Chile under military dictatorship. Her father died when she was young; her brother disappeared because he was active in the resistance to military rule; and her mother held out hope that he would return. Lucia emigrated to Canada, married, had a daughter, developed cancer, survived, and returned to Chile to take care of her mother until her death, at which point she accepted Richard’s offer to take a temporary teaching position at the university where he himself was a professor.

Richard came from a left-leaning, activist family and studied political science, but delayed building a career because of his desire to party and, later, his desire to start a family with the beautiful dancer Anita. At first he and Anita were happy, but then a series of misfortunes (including Richard’s accidental killing of their daughter Bibi) led Richard into alcoholism and Anita into suicide.

Evelyn grew up in Guatemala, where her family was torn apart by gang warfare and she was traumatized by a sexual attack. Her grandmother put her on a path of illegal immigration to America, which she (Evelyn) survived and which ended with a reunion with her mother, who herself had moved to America when Evelyn was a child. A few years later, a confrontation with her step-sister resulted in Evelyn being sent to New York to take a job as a nanny, taking care of the handicapped child of the wealthy Leroys.

As the three travelers share their stories, Richard and Lucia begin to fall in love. Before they can fully act on their feelings, however, they have to complete their mission, eventually disposing of first the car and then the body. They also make plans to send Evelyn into hiding until the anticipated investigation of the body and her employers blows over, and she can return to Guatemala to see her grandmother.

The book ends with Richard and Lucia happily in bed together, and Evelyn making plans to return to New York to visit the boy she had taken care of (and gotten close to). Each of the three, narration suggests, has made a degree of peace with their painful pasts, found their way to a relatively content and prosperous present, and is looking forward to a happier, freer future.

More summaries and resources for teaching or studying In the Midst of Winter.

In the Midst of Winter from BookRags. (c)2022 BookRags, Inc. All rights reserved.