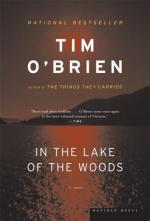 In the Lake of the Woods Summary & Study Guide

Tim O'Brien
This Study Guide consists of approximately 35 pages of chapter summaries, quotes, character analysis, themes, and more - everything you need to sharpen your knowledge of In the Lake of the Woods.

In the Lake of the Woods Summary & Study Guide Description

In the Lake of the Woods Summary & Study Guide includes comprehensive information and analysis to help you understand the book. This study guide contains the following sections:

This detailed literature summary also contains Topics for Discussion and a Free Quiz on In the Lake of the Woods by Tim O'Brien.

John and Kathy Wade travel to a cottage at the Lake in the Woods after John loses an election. While they both try to put a brave face on the situation, they are obviously devastated. The two met in 1966 when John was a senior in college and Kathy was a freshman. John is immediately fearful of losing her and begins to spy on her. While he does not find her in a situation that indicates his fear is founded, he says that he knows he cannot possibly guarantee that she will not cheat on him in the future. John leaves for a stint in the military and when he returns, he immediately sets out to spy on Kathy before announcing his presence. When she returns to the dorm after being gone for an entire night, there's little in the way of explanation offered but the author notes that "they married anyway."

It is revealed that John's actions in the military were what cost him the election. John is known as "the Sorcerer" by his fellow squad members and sometimes claims to tell fortunes. John kills a fellow soldier and apparently participates in a series of atrocities during the war. There is a court martial hearing later and one member of their company is convicted of war crimes. John himself tries to avoid being publicly associated with the situation by changing records during a brief term as an office worker near the end of his time in Vietnam. He knows that the majority of the men will never remember his name because they know him as "Sorcerer." His participation is revealed during his campaign and it's the news stories about those events that turn his winning tide.

In a series of "evidence" chapters, it is revealed that his father committed suicide when John was young, that he had been incredibly interested in magic, and that he'd been considered something of a loner as a youngster.

John and Kathy come to the cabin offered to them by the cabin's owner, Claude Rassmussen. They are there only a few days when John wakes one morning and realizes that Kathy is not there. He does not worry at first, thinking that she is probably out for a walk. Later, he calls on Claude for help and police are called in. The search expands but Kathy is not found and there is no sign of her body either. The theories abound with some believing that John killed Kathy and dumped the body. Others discount that idea and think that Kathy ran away with a mysterious lover. Still others think that John had something to do with her disappearance though not in a violent way. Those people believe John might have helped Kathy run away and then joined her. That theory gains credence when John also disappears. The mystery of her death is never solved.

More summaries and resources for teaching or studying In the Lake of the Woods.

In the Lake of the Woods from BookRags. (c)2022 BookRags, Inc. All rights reserved.