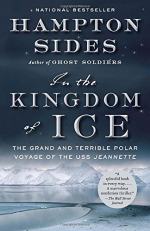 In the Kingdom of Ice - Part Two: The National Genius, Section 2 Summary & Analysis

The Herald ran a lengthy feature article about August Petermann and his theories on the Arctic and the North Pole and his hopefulness about the expedition. He predicted smooth sailing for the Jeannette and that there would be some surprises after reaching the North Pole – perhaps even a new civilization. Bennett anticipated the excitement that reports from the Jeanette would cause.

The Jeannette encountered a vicious storm off the coast of Brazil causing some damage to the ship. Emma clutched her daughter certain they would not survive. But the ship and its passengers and crew all made it to the next morning when they assessed the damaged and began clean-up and repairs. Two birds of an unusual species flew on-board during the chaos of the storm and remained becoming the ship’s mascots.

One of the mates, Master Danenhower...

In the Kingdom of Ice from BookRags. (c)2023 BookRags, Inc. All rights reserved.