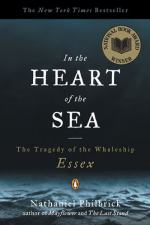 In the Heart of the Sea: The Tragedy of the Whaleship Essex Topics for Discussion

Nathaniel Philbrick
This Study Guide consists of approximately 52 pages of chapter summaries, quotes, character analysis, themes, and more - everything you need to sharpen your knowledge of In the Heart of the Sea.

After the shipwreck, why did the crew decide to sail for the coast of South America rather than the closer islands to the east? What factors (historical, cultural, etc.) led to their decision?

What were the differences in George Pollard's and Owen Chase's leadership styles? Did these differences contribute to the tragedies? If so, how?

Discuss the social hierarchies in Nantucket and on whaleships. How did a person's background affect their position and their experiences throughout the tragedy?

Philbrick mentions that Nantucketers don't talk about the Essex perhaps because of the race of the men who were the first to be eaten by the others. Did race have anything to do with who lived or died on the Essex? If so, how?

Describe the experiences that a crew on a whaling ship would have. What was the process of killing a whale? Where would...

More summaries and resources for teaching or studying In the Heart of the Sea: The Tragedy of the Whaleship Essex.

In the Heart of the Sea: The Tragedy of the Whaleship Essex from BookRags. (c)2021 BookRags, Inc. All rights reserved.