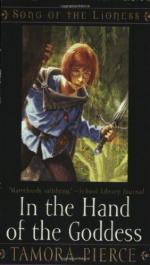 In the Hand of the Goddess Summary & Study Guide

In the Hand of the Goddess Summary & Study Guide Description

In the Hand of the Goddess Summary & Study Guide includes comprehensive information and analysis to help you understand the book. This study guide contains the following sections:

This detailed literature summary also contains Topics for Discussion on In the Hand of the Goddess by Tamora Pierce.

This is the second book in the Song of the Lioness series centered around Alanna of Trebond.

Alanna of Trebond is disguised as a boy so that she can train to become a warrior for the kingdom of Tortall. Alanna's dream is to become a Knight of the Realm and earn her shield. Alanna is 15 when the story begins and is 18 when it ends. Alanna is the squire to Prince Jonathan of Tortall. The two are best friends and eventually become lovers. Alanna has the gift of magic and is a healer. She is also blessed by the Goddess and carries an ember-stone given to her by the Goddess. This ember-stone helps guide Alanna in dangerous circumstances.

Alanna is friends with George, the Rouge, who is considered by many to be the king of Thieves. He is aware that she is not a boy and is in love with Alanna. However, Alanna is in love with Jonathan, the prince for whom she squires. Alanna trains as a squire and goes into battle with her friends. While there she uses her healing powers to help others. She is thrust into the middle of a power play for the throne when the king's nephew, Duke Roger, tries to kill Jonathan so that he can ascend to the throne.

Alanna makes it through the Ordeal and becomes a Knight of the Realm. She is forced to reveal her identity as a girl when she fights Duke Roger after he tries to kill the queen. Alanna kills Roger, the most powerful sorcerer in the realm, and rides off to find adventure. This sets up the next book in the series.

In the Hand of the Goddess from BookRags. (c)2022 BookRags, Inc. All rights reserved.