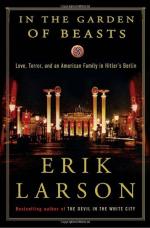 Plot Summary
+Chapters Summary and Analysis
Introduction: 1933: The Man Behind the Curtain
Part I - Into the Wood
Part II: House Hunting in the Third Reich
Part III: Lucifer in the Garden
Part IV: How the Skeleton Aches
1934, Part V: Disquiet
Part VI: Berlin at Dusk
Free Quiz
Characters
Objects/Places
Themes
Style
Quotes
Topics for Discussion
Order our In the Garden of Beasts: Love, Terror, and an American Family in Hitler's Berlin Study Guide

In the Garden of Beasts: Love, Terror, and an American Family in Hitler's Berlin - Part VI: Berlin at Dusk Summary & Analysis

Erik Larson
This Study Guide consists of approximately 33 pages of chapter summaries, quotes, character analysis, themes, and more - everything you need to sharpen your knowledge of In the Garden of Beasts.

Messersmith was named the US Ambassador to Austria. He was delighted and Dodd was happy to see him go. At a going away party for him, Putzi complained about Messersmith and Roosevelt siding with the Jews. He revealed that Rohm wanted to control the army and air force. At another dinner party that Rohm attended, conversation focused on the conflict between he and Hitler. The Gestapo learned of the dinner, which became infamous. Four of the dinner guests were later murdered, one fled the country under the threat of death and another was imprisoned in a concentration camp. Hans Dieckhoff, a foreign minister, told Dodd that he thought Hitler would soon be overthrown. Dodd thought the minister's words were dangerous.

Martha was invited to a luncheon with the writer, Rudolf Ditzen. Ditzen, like...

(read more from the Part VI: Berlin at Dusk Summary)

More summaries and resources for teaching or studying In the Garden of Beasts: Love, Terror, and an American Family in Hitler's Berlin.

In the Garden of Beasts: Love, Terror, and an American Family in Hitler's Berlin from BookRags. (c)2023 BookRags, Inc. All rights reserved.