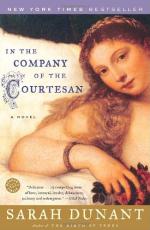 In the Company of the Courtesan Summary & Study Guide

Sarah Dunant
This Study Guide consists of approximately 23 pages of chapter summaries, quotes, character analysis, themes, and more - everything you need to sharpen your knowledge of In the Company of the Courtesan.

In the Company of the Courtesan Summary & Study Guide Description

In the Company of the Courtesan Summary & Study Guide includes comprehensive information and analysis to help you understand the book. This study guide contains the following sections:

This detailed literature summary also contains Topics for Discussion on In the Company of the Courtesan by Sarah Dunant.

"In the Company of the Courtesan" is the story of Fiammetta Bianchini, a 16th-century Roman courtesan, told through the eyes of her loyal companion, the dwarf Bucino. The novel describes the ups-and-downs of Fiammetta and Bucino's fortunes as they leave Rome for Venice and set up shop in an unfamiliar city, with few friends and little money.

Beginning in Rome, Bucino and Fiammetta must flee, despite the conniving efforts of the courtesan to make peace with the invading religious factions. She leads the dwarf back to her hometown of Venice, where they find her dead mother's home. Summoning a healer to bring Fiammetta back to full health after the trying journey by boat, Bucino is prevented by the woman, La Draga's, disability and apparent psychic powers. Bucino, meanwhile, starts to explore the new city and use it to his advantage. He observes the patterns of courtesans being propositioned in and outside of a major church. He recognizes an old writer acquaintance of Fiammetta's, Pietro Aretino. The reader later learns that this is an old flame of Fiammetta's, disliked in Rome for his scandalous political writings.

Wanting to begin their business again, Bucino's observations help Fiammetta understand how professional courtesans work in Venice. They must move into a more central part of the city. After Fiammetta recovers, she seduces a Turkish man in the street, but does not have time to follow through with the affair. Things start to look up for Fiametta and Bucino, especially as La Draga suggests a subtle treatment to replace Fiammetta's shorn hair, allowing her to get back to work earlier. To pay for the expensive cosmetics, Bucino goes to sell a ruby - only to find that the real ruby is gone and has been replaced by a clever glass copy. He blames La Draga for this.

Fiammetta takes her first client and steals his purse while he is asleep. She has come up with the idea of trying to work from a gondola, a cheaper idea than moving to the center of the city. However, while trying to sell a book of sonnets that they own, Bucino discovers that it is full of pornographic poems and drawings, instead - written by Aretino. They blackmail Aretino into finding them their first real patron, a soap merchant who helps Fiammetta set up shop.

Some years after this rise to prosperity, tension has arisen between Fiammetta and Bucino. However, when he gets pushed into the canal during a riot, he becomes very ill, and La Draga tends to him as Fiammetta forgives him. Later, in order to thank her and also out of curiosity, Bucino goes to see La Draga at her home, where he has never been. He discovers that she is not actually disabled, nor blind, but has been pretending all the time. Enraged, he finds scientific materials, including a bag of bones, in her home, and throws the bag of bones into the canal before leaving. When the bones wash up on shore later, La Draga is tried for witchcraft and found guilty.

Bucino goes to see her in her cell and they make amends. However, despite all of Fiammetta's high connections, they can do nothing to save her. The healer is executed for witchcraft. At the end of the book, however, the dwarf and the courtesan are offered an opportunity to make amends, as her young daughter, also called Fiammetta, comes to them in need of rescue.

More summaries and resources for teaching or studying In the Company of the Courtesan.

In the Company of the Courtesan from BookRags. (c)2022 BookRags, Inc. All rights reserved.