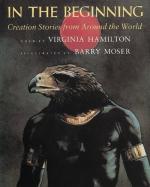 In the Beginning: Creation Stories from Around the World Summary & Study Guide

Virginia Hamilton
This Study Guide consists of approximately 28 pages of chapter summaries, quotes, character analysis, themes, and more - everything you need to sharpen your knowledge of In the Beginning.

In the Beginning: Creation Stories from Around the World Summary & Study Guide Description

In the Beginning: Creation Stories from Around the World Summary & Study Guide includes comprehensive information and analysis to help you understand the book. This study guide contains the following sections:

This detailed literature summary also contains Topics for Discussion and a Free Quiz on In the Beginning: Creation Stories from Around the World by Virginia Hamilton.

"In the Beginning" is a collection of twenty-five creation stories from a variety of countries, cultures, and religions from around the world. There are myths that are ancient yet familiar to the modern world such as those from the Greeks including the story of Pandora's Box, the trials of the twins Prometheus and Epimetheus, and the conflict between father and son in the story of Kronos and Zeus. The story of the sun god Ra from Egyptian mythology is another creation story popular in modern times. Many tales are from less familiar sources such as those from Pacific island cultures and remote regions of Africa. The compilation provides insight and understanding into ancient and more contemporary legends that address the mysterious and complex issue of creation.

As each myth and story unfolds, similarities can often be noted among the collection. For example, in each myth, there is generally one central god or being that already existed before any other life form came into being. Another similarity among most of the creation myths is the unexplained origin of the first god.

The twenty-five stories include creation myths from such diverse cultures as the Eskimos, Guinea, China, American Indians, Russia, Australia, and many others. What is readily apparent is that the imaginings of humans are similar no matter from what corner of the world they originate. Many of the stories speak of the separate realms of earth and sky, often referred to has the heavens.

Some stories attempt to unravel the mystery of man and depict how man has struggled with the question of the origin of his own existence over many centuries. That topic is key in many of the myths and the desire for its resolution is common to the many cultures represented in this book. This issue is no more apparent than in the story, "Four Creations to Make Man" when the gods make several attempts at create man before they "get it right." In one iteration, a body made of mud was too weak and watery. Their next attempt was to carve man out of wood. This human version was sturdy and strong but lacked feelings and thoughts, becoming therefore unacceptable.

A thread of recognition runs through the stories about the distinction between animal life and plant life and between that of non-sentient animals and sentient creatures, i.e. human beings. Although many myths are not necessarily religious in nature, a majority of the stories feature the powerful god versus the subservient man who was created to serve the god or gods. Many stories are tales of conflict between god and god and in some cases between god and man.

The collection points to how man has been drawn to the mystery of creation from early times forward and how the same questions are asked but often with very different responses.

More summaries and resources for teaching or studying In the Beginning: Creation Stories from Around the World.

In the Beginning: Creation Stories from Around the World from BookRags. (c)2022 BookRags, Inc. All rights reserved.