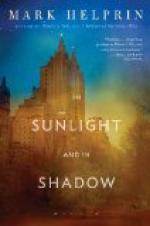 In Sunlight and in Shadow Summary & Study Guide

In Sunlight and in Shadow Summary & Study Guide Description

In Sunlight and in Shadow Summary & Study Guide includes comprehensive information and analysis to help you understand the book. This study guide contains the following sections:

This detailed literature summary also contains Topics for Discussion on In Sunlight and in Shadow by Mark Helprin.

"In Sunlight and In Shadow" is a novel about romance and morality by author Mark Helprin. Set against the backdrop of post World War II New York, a young man, Harry Copeland, has recently returned from his duties as a soldier in the front lines of Europe, and he falls instantly in love with a young woman from an extremely wealthy family. Catherine Hale returns Harry's interest, but is already meant to marry Victor, another wealthy individual that she has essentially been engaged since she was thirteen.

As Harry tries to convince her to call off the wedding, his father's business, Copeland Leather, comes under assault from the mafia, who extort him and his co-owner, a black man named Cornell, to the extent that they cannot possibly stay afloat. Harry struggles with these difficulties at the same time he works to bring himself close to Catherine, going so far as to crash her engagement party, where, to his utter surprise, he discovers she has broken the wedding off with Victor by herself. She had been engaged to him for such a long time, she never thought of calling off the wedding before she had met Harry, but found it impossible to go through with once she had in fact met him.

The two quickly fall in love, and Harry finds her family surprisingly welcoming and understanding, despite the fact that he is Jewish, and the fact that most people clearly disapprove of the fact that he is with Catherine. Meanwhile, tensions with the mafia worsen the more Harry tries to resolve the situation. Meanwhile, Catherine's singing career comes under fire from bad reviews, despite the fact that she is clearly an excellent singer. The two struggle through these difficulties together, until one night, they rescue James Vanderlyn, quite possibly the richest man in the United States. Vanderlyn is also still working with the U.S. government and military, and has contacts powerful enough to get him supplies that will help Harry kill Verderame, the mob boss who has been harassing him. Harry and Catherine marry quickly, and Harry travels across the country to collect the soldiers he once fought with in order to help him fight against Verderame. They plan an ambush carefully, but they all know that risks are involved, despite the fact that this exercise should be safer than most of the things they did in the war. The night of the ambush arrives, and Harry and his men attack Verderame, but Harry is wounded, and dies shortly thereafter. Meanwhile, Catherine has remained a singer in no small part because of Harry's brave example in the face of injustice. She is offered a major singing role with a large production, and discovers a letter Harry wrote to her before he died.