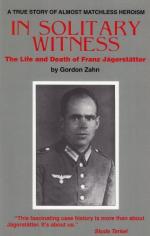 Plot Summary
+Chapters Summary and Analysis
An Introduction, St. Radegund, and the Young Ruffian
The New Man, From Enns to Berlin
One of God's Special Friends
A Train to Hell and The Martyr and His Village
The Martyr and His Church and The Martyr as Rebel: A Sociological
Free Quiz
Characters
Objects/Places
Themes
Style
Quotes
Topics for Discussion
Order our In Solitary Witness Study Guide

Gordon Zahn
This Study Guide consists of approximately 29 pages of chapter summaries, quotes, character analysis, themes, and more - everything you need to sharpen your knowledge of In Solitary Witness.

This detailed literature summary also contains Topics for Discussion and a Free Quiz on In Solitary Witness by Gordon Zahn.

Franz Jagerstatter is an ordinary peasant farmer when the Nazis move into his home country of Austria. Jagerstatter is ordered to report for military training under the Nazi regime and does so but then refuses to serve in the military, citing a conviction that the Nazis are evil and that war is unjust. He is arrested and imprisoned for his stance. Despite being given opportunities to change his mind, he refuses, continues to stand for what he believes to be a necessary position in the eyes of God, and is sentenced to death. Though he knows he will be executed, he refuses repeated offers to forego the execution by serving in the military. He is even offered a non-combat position but refuses that as well, saying that any service for the Nazis will be tantamount to defying God and earn himself a place in eternal hell.

Jagerstatter's story is told from the perspective of a researcher who found documents in the form of commentaries written by Jagerstatter and letters from Jagerstatter to his wife, written from prison. He also interviewrf family, friends and acquaintances. His family takes the stand that he did what he believed was right in the eyes of God, withstood urging to capitulate and died an honorable death. Most of the people from his home village see his death as a senseless waste. The villagers say that Jagerstatter's refusal to serve in the military did not change the outcome of the war at all and that he gave his life in vain. Though the people of his village continue to respect him as a person, they feel that he allowed religious fanaticism to take over his life, ruling him to the point of a senseless death.

Jagerstatter's life is typical of men of his location and time period. He is described as something of a wild youth and possibly fathers an illegitimate child. At some point, he changes, casting away the mischievous aspects of his youth and becoming a serious and devout Christian. He marries a woman who is likely also devout and the two go to Rome for their honeymoon where they see the pope. Some attribute Jagerstatter's changed life to this visit to Rome but the author believes the change occurred before his marriage.

Through his letters, Jagerstatter urges his wife, mother and three daughters to remain firm in their belief in God and to work toward an eternal reward. A priest who is with him just before his execution describes Jagerstatter as calm and composed, peaceful with his decision and his assurance that he is going to join his Heavenly Father.

More summaries and resources for teaching or studying In Solitary Witness.