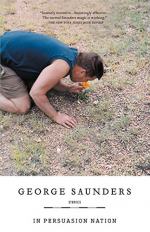 This detailed literature summary also contains Quotes and a Free Quiz on In Persuasion Nation by George Saunders.

The following version of this book was used to create this study guide: Saunders, George. In Persuasion Nation. New York: Penguin Group, 2006.

In Persuasion Nation is a collection of 12 short stories by George Saunders.

“I CAN SPEAK! TM” is written in the form of a letter. Rick Sminks, a sales associate at a company called KidLuv, Inc. is writing the letter in response to Ruth Fanigilia. Ruth is an unsatisfied customer who wants to return a product that she purchased. The product is a device designed to be worn by a baby; the device makes it appear that the baby is speaking, but the speech is merely simulated. It eventually becomes clear that Rick’s sales numbers have been declining, and he fears losing his job.

“Jon” takes place in a dystopian future America where corporations are large and powerful. Also, most citizens of the country live in relative poverty. When Jon was an infant, Jon’s mother sold him to a corporation. He has spent his entire life since then living in a corporate facility. His occupation entails watching advertisements and writing down his impressions of them. In his late teens, Jon forms a romantic/sexual bond with Carolyn. She also lives in the facility and is about the same age as Jon. When Carolyn becomes pregnant, she decides to leave the facility so that she can raise her child in the outside world. At first, Jon remains in the facility, but he eventually leaves so that he can be with Carolyn and their child.

In “The Red Bow,” the unnamed protagonist is a man in grief over the death of his daughter. She was attacked and killed by a rabies-infected dog. The protagonist gathers a group of followers, and they begin a crusade to kill all dogs that might have even have the slightest possibility of being rabid. Eventually, they resolve to kill every animal in the town in order to guarantee that no other child will ever be attacked.

“Christmas,” is narrated by an unnamed man in his mid-twenties. He is unable to find any work prospects, except for a job doing manual labor for a roofing company. He forms a friendly rapport with Rick, one of his coworkers. Rick is married and has 14 children. Rick and the narrator receive holiday bonus payments, but Rick loses his in a poker game. The narrator feels bad for Rick but does nothing to help him.

“Adams” is narrated by a man named Roger. He is a husband and father. One day, a man trespasses into Roger’s home. The man is Roger’s neighbor, Frank Adams. Roger jumps to the conclusion that Adams means to harm Roger’s children. Roger attacks and hits Adams. Later, fearing that Adams may try to harm Roger’s children in the future, Roger breaks into Adams home. Roger plans on stealing everything in the house that can be used as a weapon. The Adams family catches Roger in the act. They attack Roger. Roger flees, setting fire to the house as he does so.

“93990” is written in the form of scientific experiment report. The experiment involves injecting monkeys with varying doses of a toxic chemical. The chemical causes all of the monkeys to suffer painful deaths. However, there is one exception; one monkey appears to be completely immune to the chemical. When the experiment ends, the scientists kill the surviving monkey, as they no longer have any use for it.

“Brad Carrigan, American” follows a group of television characters who are aware that they are television characters. The show follows Brad Carrigan, his wife Doris, and their neighbor Wayne. Brad is concerned because, recently, the show has become quite juvenile and mean-spirited. These changes appear to have been made to correspond with similar television trends. Doris and Wayne cooperate with the changes, but Brad resists them. Brad tries to promote virtues of kindness and generosity. Eventually, the unseen people in charge of the show remove Brad from the show altogether, and he ceases to exist.

“In Persuasion Nation” open with a series of advertisement-style vignettes. The vignettes utilize cartoonish violence and cruel humor. Eventually, the victimized characters from these vignettes manage to escape. They form alliances and roving groups in order to protect each other. Eventually, a powerful, supernatural being appears to them in the form of a floating green symbol. The symbol claims to be God, and it forces them to return to their vignettes. When one of the characters declares that the symbol is a false god, the symbol kills that character.

“Bohemians” takes place in a relatively impoverished neighborhood in an unspecified American town. The narrator is a ten-year-old boy who lives in the neighborhood. Two of the residents in the neighborhood are Mrs. Poltoi and Mrs. Hopanlitski, both of whom immigrated to America from Eastern Europe to escape violent religious persecution. The narrator prefers the company of Hopanlitski, who is warmer and kinder. However, he eventually discovers that Poltoi is in fact gentle and kind. He then learns that Hopanlitski is actually a habitual liar who was born in Illinois, not Eastern Europe.