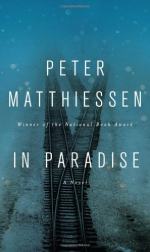 Peter Matthiessen
This Study Guide consists of approximately 29 pages of chapter summaries, quotes, character analysis, themes, and more - everything you need to sharpen your knowledge of In Paradise.

In Paradise Summary & Study Guide includes comprehensive information and analysis to help you understand the book. This study guide contains the following sections:

This detailed literature summary also contains Quotes and a Free Quiz on In Paradise by Peter Matthiessen.

"In Paradise" is a historical novel by Peter Matthiessen which details the journey of Clements Olin to Poland to learn more about his mother. Clements was born in the Cracow ghetto to a Jewish woman, later sent to be raised by his biological father in America. Olin grows up unaware that his mother was Jewish, until his grandmother reveals the information years later while dying. Olin, now in his fifties and divorced, ultimately travels to Auschwitz to learn more about his mother, and to see the place where she likely died. While there, he falls in love with a Catholic nun. "In Paradise" examines the legacy of the Holocaust, and how it continues to haunt both those who were directly affected and those affected in distant ways.

Clements arrives in Cracow, late for the beginning of a spiritual retreat at Auschwitz. Olin gets a ride to the camp from two local people who have little knowledge of the atrocities that took place at there, and Olin finds himself growing angry with their lack of understanding.

When Olin arrives at the camp itself, he keeps himself separate from the others who have come to see where they or their family members suffered more than fifty years before. Olin visits Birkenau, the place where the mass executions were usually carried out, but he cannot force himself to go in at first. He visits the museum with the others but finds the lack of empathy annoying. He later returns to Birkenau only to run into another man who is also angry and obtuse.

Olin remains a spectator at the camp while the other visitors argue over who has more right to be there and why some should not be allowed to visit. Some of the stories of the people, or their family members, begin to come out. At the same time, Olin finds himself attracted to a young novice nun, Sister Catherine, and he begins attending her morning worship sessions.

Olin finally takes a picture of his mother that was given to him by his stepmother in the village where she lived. Olin has trouble finding anyone willing to speak to him about the past. Eventually, a local woman offers to help him and he finds the house where his mother once lived. He learns that the estate agent for his family took over the house after his mother’s family left it. He also learns that a local man who was a guard at Auschwitz remembers his mother being brought there for execution.

Olin tells the others that he believes his mother was Jewish and she was killed at Auschwitz. They make fun of him, and Olin finds himself struggling with this new definition of himself. Olin also worries that the nun he loves will think of him differently now that he has announced he is a Jew. She does seem to think of him differently, but not because of his Jewish heritage, but because of his own shame in relation to it.

Olin ultimately leaves the camp and goes to Cracow. There, he runs into Sister Catherine, who leaves him once more. Olin is left alone and saddened by all he has learned and lost.

More summaries and resources for teaching or studying In Paradise.

In Paradise from BookRags. (c)2022 BookRags, Inc. All rights reserved.