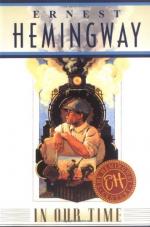 In Our Time - Chapter 1 Summary & Analysis

The layout of the chapters in the book is that each short story is preceded by a "chapter page" on which the number of the chapter is given, and then a short memoir appears as one or sometimes a few paragraphs in italics on the page.

Memoir--The narrator tells about a time when he was a kitchen corporal moving up to the front at night during the First World War with his unit. The Lieutenant is so drunk he has trouble sticking to the road and keeps riding his horse out into the field. The Lieutenant then rides back and chides the narrator about keeping the fire going in his kitchen even though they are 50 kilometers from the front.

Story--This chapter is entitled "Indian Camp," and relates an incident from the early life of a character named Nick Adams, whose life parallels that...