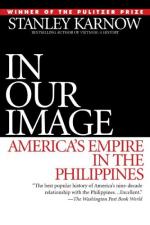 In Our Image: America's Empire in the Philippines Topics for Discussion

Describe three instances of ego coming into play during the scope of the book that helped to make things go for the worse.

Why did the Spanish execute Filipinos who merely wanted more rights, not necessarily independence? How did this increase, rather than decrease calls for independence and weaken the Spanish position?

Typically, why didn't colonial powers teach their "subjects" to speak their language? Why did the United States break this trend?

Did the elitism and blatant racism practiced by the United States "emissaries" to the Philippines make their cause unjust?

Why was Douglas MacArthur so paranoid and insecure when it came to his image?

Describe President McKinley's habit of following public opinion. Was he a forerunner to modern, poll-driven presidents?

Was Douglas MacArthur a good strategist? Explain and back up with examples.

Cite some examples of the Marcos' use of manipulation to coerce...

In Our Image: America's Empire in the Philippines from BookRags. (c)2023 BookRags, Inc. All rights reserved.