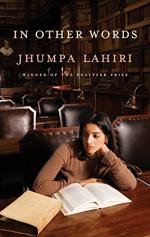 In Other Words Summary & Study Guide

Jhumpa Lahiri
This Study Guide consists of approximately 31 pages of chapter summaries, quotes, character analysis, themes, and more - everything you need to sharpen your knowledge of In Other Words.

In Other Words Summary & Study Guide includes comprehensive information and analysis to help you understand the book. This study guide contains the following sections:

This detailed literature summary also contains Topics for Discussion on In Other Words by Jhumpa Lahiri.

In her book “In Other Words” Jhumpa Lahiri shares her struggles and breakthroughs as she learns to both speak and write Italian fluently. The book is Jhumpa’s first major work in Italian. It is presented in both the Italian and English translations. In her story Jhumpa discusses her relationship with the Italian language as well as the languages of English and Bengali. Another major theme in the book is identity, as Jhumpa bases a good deal of her identity on language.

Jhumpa details her developing relationship with the Italian language from her first encounter with it through the completion of her book. She fell in love with the Italian language when she and her sister visited Italy in 1994. Jhumpa began learning to speak Italian using tutors who lived in America. She felt, however, that she was in exile from the language she loves. Many years later Jhumpa decided she must live in Rome in order to immerse herself in the language. Part of her decision to immerse herself in Italian included her decision to read only in Italian.

She describes the way she reads a book in Italian and then went back to identify unfamiliar words using a dictionary. She gathered words she wanted to learn and remember as she went about her day-to-day business. Jhumpa surprised herself by one day beginning to write her diary in Italian. She realizes that change had come about because she was finally hearing Italian in her head. One day, while sitting in a library, Jhumpa conceived her first short story in Italian.

From this point Jhumpa begins discussing with her reader her insecurities with language in more depth. Her writing in Italian was constrained by her limited vocabulary. She struggled so much with her writing in Italian that she believed her goal may be an impossible one. Still, she kept going because she wanted to test her creative powers in Italian, a language that she loves. She also believed this lack of comfort with Italian would spark and rejuvenate her creative process. She describes her feeling of overwhelming joy when her her work was first published in Italian. The book includes two short stories written by Jhumpa in Italian.

More summaries and resources for teaching or studying In Other Words.

In Other Words from BookRags. (c)2022 BookRags, Inc. All rights reserved.