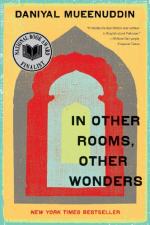 In Other Rooms, Other Wonders Summary & Study Guide

Daniyal Mueenuddin
This Study Guide consists of approximately 60 pages of chapter summaries, quotes, character analysis, themes, and more - everything you need to sharpen your knowledge of In Other Rooms, Other Wonders.

In Other Rooms, Other Wonders Summary & Study Guide Description

In Other Rooms, Other Wonders Summary & Study Guide includes comprehensive information and analysis to help you understand the book. This study guide contains the following sections:

This detailed literature summary also contains Quotes and a Free Quiz on In Other Rooms, Other Wonders by Daniyal Mueenuddin .

The collection, In Other Rooms, Other Wonders by Daniyal Mueenuddin, begins with “Nawabdin Electrician,” a story named after its protagonist, Nawabdin (Nawab). In the piece, Nawab, a hard-working tradesman and father of over a dozen children, is the employee of businessman K.K. Harouni. Nawab is injured while preventing a valuable possession from being stolen. Placed in a hospital bed next to the man who was attempting to rob him, Nawab shows neither mercy nor remorse. By the time the would-be robber has died, Nawab is congratulating himself for being the survivor of their altercation.

The second story in the collection, “Saleema," features another character employed by K.K. Harouni, albeit indirectly. Saleema becomes a servant to Harouni’s sister and becomes involved with one of Harouni’s senior servants, having his child and leaving her drug-addicted husband. Eventually, however, the servant’s wife returns to her long-estranged husband, and Saleema and her child end up living a life on the streets.

Another master-servant relationship is the central element in the collection’s third story. “Provide, Provide” is the story of Jaglani, Harouni’s manager during a prosperous time some years earlier than the first two stories. Jaglani becomes involved with Zainab, a woman originally engaged to be a servant; marries her; and arranges for her to become the mother of a child fathered by his son from an earlier marriage. Just as Jaglani is both becoming politically successful and disillusioned with Zainab, he is stricken with cancer and dies, his family ensuring that Zainab receives no financial or moral considerations in the aftermath of his death. A similar situation plays out in the central story in the collection, a story that gives the collection its title. K.K. Harouni is one of the central characters in the short story (which lends its name to the book) “In Other Rooms, Other Wonders." This is the story of servant girl Husna who becomes Harouni’s mistress but who, after his death, is treated as badly by his family as Zainab was treated by Jaglani’s.

Between “Provide, Provide” and the short story “In Other Rooms, Other Wonders” is the only first-person narration in the collection, “About a Burning Girl.” This story is unique for another reason. It takes the form of a mystery with Its narrator (a corrupt judge) telling how a member of his household is arrested for a crime he did not commit and how a knowledgeable, unemotional law clerk manages to unearth the truth about the motivations of the servant and his family, all of whom are distantly connected (through employment) to K.K. Harouni’s nephew. Distant connections to the Harouni family are also found in “Our Lady of Paris," the story of the relationship between Sohail, the law-student son of one of K.K. Harouni’s cousins, and Helen, a young American woman he met while attending a university in the United States. Sohail’s parents, particularly his mother, take a deep and influential interest in the development of the relationship. At the end of the story, there is uncertainty about the continuation of the relationship.

The two final stories in the collection, “Lily” and “A Spoiled Man." indicate that the relationship in “Our Lady of Paris," did not survive. Both stories include references to Sohail and to Sonya, the American woman he eventually married. The two are peripheral characters in “Lily," the story of a young woman who marries an unlikely husband out of a determination to no longer be the party person she used to be. Then, as the collection draws to a close, Sonya plays a key role in “A Spoiled Man," the story of an elderly servant who benefits from the good intentions of Sonya and other characters. However, in spite of everyone’s best efforts and intentions, the servant ends up dying alone, with his precious possessions looted.

More summaries and resources for teaching or studying In Other Rooms, Other Wonders.

In Other Rooms, Other Wonders from BookRags. (c)2021 BookRags, Inc. All rights reserved.