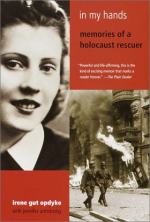 Summary
+Chapters Summary and Analysis
Tears - Part One: Before the Storm
Part One: The Lightening War - The Hospital
Part One: Svetlana Year - Through the Gate
Part One: My Heart, Like a Netted Bird
Part Two: When I Thought I Could Be Happy - Major Rugemer
Part Two: A Drop in the Ocean - Only a Girl
Part Two: Stealing from Rokita - Puszcza Janowka
Part Two: The Blows of the Ax - The Race
Part Two: Aktion - The Villa
Part Two: The Forester’s Cottage - The Coming Darkness
Part Two: The Punishment for Helping a Jew - Into the Forest
Part Three: To Fight - Flight
Part Three: On German Soil - Postscript
Important People
Objects/Places
Themes
Styles
Quotes
Topics for Discussion
Order our In My Hands: Memories of a Holocaust Rescuer Study Guide

In My Hands: Memories of a Holocaust Rescuer Summary & Study Guide

Irene Gut Opdyke
This Study Guide consists of approximately 62 pages of chapter summaries, quotes, character analysis, themes, and more - everything you need to sharpen your knowledge of In My Hands: Memories of a Holocaust Rescuer.

In My Hands: Memories of a Holocaust Rescuer Summary & Study Guide Description

In My Hands: Memories of a Holocaust Rescuer Summary & Study Guide includes comprehensive information and analysis to help you understand the book. This study guide contains the following sections:

This detailed literature summary also contains Topics for Discussion on In My Hands: Memories of a Holocaust Rescuer by Irene Gut Opdyke.

A former resident of Poland tells her experiences first helping rescue Jews from Hitler’s regime then as a partisan fighter for Poland during the time of World War II in the book “In My Hands” by Irene Gut Opdyke. A central image in the book is that of a baby thrown into the air and shot by a German officer. Despite the cruelty going on around her during the time of war, Irena took advantage of her free will and chose to help those around her. With her care, thirteen Jews were saved directly from Nazi cruelty while dozens more were indirectly helped by her warnings of coming raids and offerings of food and supplies.

Irena began her experience as a Holocaust rescuer while in nursing school in Radom during the beginning of World War II. With the Germans bearing down on the city, Irena volunteered to go when the Polish army asked for doctors and nurses to travel with the retreating troops. A few days later, Poland was split between the Germans and the Russians and Irena learned she was part of a people without a country. She had little choice but to stay with the now illegal Polish army living and hiding out in the woods. During a trip to town for supplies Irena was raped and left for dead by Soviet soldiers. Different soldiers found her and she was taken to a hospital where she was treated for her injuries. Considered a prisoner of war, she was forced to work in the hospital in Ternopol once she recovered. One of the doctors, Dr. Ksydzof, took offense to Irena and attempted to rape her one night. She fought him off and reached out to another doctor in the hospital who helped her to escape.

For a year she lived and worked with Miriam, a country doctor in Svetlana, but when an opportunity arose for her to be reunited with her family, she jumped for it. In her attempt to get a train ticket more quickly, she passed herself off as German, but she was recognized in the park at Ternopol and was arrested as an escaped prisoner of war. The doctor who tried to rape her had spread rumors that she had been involved in a dangerous group of Polish partisans. Hoping that they would be able to catch her group of resistors, the Russians allowed her the freedom of spending the night with a friend after several days of interrogations. Irena gave them a fake address and ran for the train station as soon as she was able. She learned the train for which she had a ticket had not yet left.

Once she reached the town of Radom, she found her family living with her Aunt Helen. For a short while the family enjoyed a reunion but soon the Germans called for Irena’s father, wanting him to teach them how to run a factory he’d set up in their hometown. Both Irena’s mother and father went back to Kozlowa Gora and take the three younger girls but left Irena and Janina with Aunt Helen.

Around this same time, because she could speak Polish, Irena was given a job working with Herr Schulz, the overseer of the mess hall and living quarters of the German soldiers in Radom. It was after Irena saw a mass shooting in the Jewish ghetto outside the dining hall of the German army’s quarters that she became actively involved in helping to save the Jews. Her first act of defiance came in the form of a metal box of food that she pushed beneath the fence that separated the ghetto from the rest of the city. In those times, this act was a capital crime punishable by death. Irena did not stop there but promised the Jews in her employ in the laundry facility of the German base that she would keep them safe. She eavesdropped on the German leaders’ conversations during meals and passed along information when she learned of a coming raid or scheduled extermination. It was during this time that Irena went with her friend Helen to try to see Helen's husband, who had been captured by the Germans, that Irena saw the baby thrown into the air and shot by the German solider, a vision to which she refers several times in the book.

Meanwhile, plans were being made to clear Radom of Jews and Irena put herself in danger to protect those she swore she’d help. After a call for them to return to their camps for extermination, Irena hid them first in a secret space in the laundry room, then later in a vent in a German major’s bathroom. This same German major decided to move into a nearby villa and employed Irena as a housekeeper. This house had a basement, formerly used as servant’s quarters, in which Irena stowed six of her Jewish friends, along with Helen’s husband and three of his friends. One day the major learned about two of the female Jews being hidden in his basement. He was angry, but agreed to keep Irena’s secret if she would be his mistress.

This arrangement continued until higher powers in Germany demanded the major give up his Polish mistress. At this point, Irena transported her Jewish friends to the forest where other Jews were living in a dugout shelter. The pregnant Ida Haller was hidden at the home of another man who was helping the Jews. In an attempt to keep her safe, the major took Irena to Kielce where she ran away from him and joined the partisans. These partisans fought against anyone trying to harm Poland. Irena fell in love with and was to marry Janek, the head of the group, but he was killed just days before the wedding. After months of resistance work with the partisans, Irena contracted pneumonia. It took her months to recover. Once she was better, the war was over and Irena decided to go searching for her family again. She started in Radom but her Aunt Helen had heard nothing from the family recently. Irena then moved to Krakow hoping to meet up with some of the Jewish people she saved. She met Fanka who got her in touch with the others. Irena was happy to learn that Ida’s baby had been born safely and was well. It was when she attempted to visit the baby that she was arrested by Russians. For days she was forced to work and was interrogated by the Russians about her work in the partisan movement. They seemed to think she was the leader of the group of partisans in their area. She was finally able to escape and was taken to Krakow for her safety.

Irena spent time in a camp for displaced persons where she was interviewed by William Opdyke about her experiences as a holocaust rescuer. Opdyke told her that she would be welcome in the United States. In America she got a job in a factory and learned English. Later, she and Opdyke met up again and are married.

More summaries and resources for teaching or studying In My Hands: Memories of a Holocaust Rescuer.

In My Hands: Memories of a Holocaust Rescuer from BookRags. (c)2022 BookRags, Inc. All rights reserved.