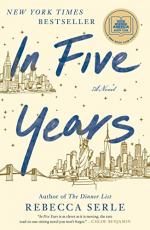 Rebecca Serle
This Study Guide consists of approximately 42 pages of chapter summaries, quotes, character analysis, themes, and more - everything you need to sharpen your knowledge of In Five Years.

The majority of the novel takes place in New York City, where all the characters live. All the characters love New York, and Dannie often praises it in her narration. Serle mentions the vibrancy and life of New York, pulling the cityscape into the conversations and experiences of the characters. The streets, restaurants, neighborhoods, and law firms mentioned in the novel are all real New York locations, giving genuine context to the novel and revealing Serle’s own familiarity with the city from living there herself.

Dannie and David’s apartment in Gramercy Park represents Dannie’s five year plan, as this is the apartment of her dreams. It also represents how the manifestation of her plan has not resulted in her total life satisfaction. Her apartment is all grey and white, and although chic, feels devoid of personality and life...

More summaries and resources for teaching or studying In Five Years.