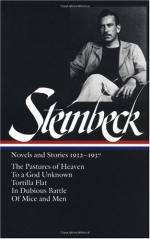 This detailed literature summary also contains Topics for Discussion on In Dubious Battle by John Steinbeck.

Published in 1936, In Dubious Battle is considered the first major work of Pulitzer Prize-winning author John Steinbeck. Set in a fictionalized valley in California, the story explores themes Steinbeck would continue to develop in later works: group behavior, social injustice, man’s inhumanity to man—themes which continue to be relevant to today’s readers. A labor conflict between migrant apple pickers and the local growers’ association is the backdrop against which Jim Nolan becomes involved in the labor movement and rapidly matures as he learns what it means to do organizational fieldwork for the Party before meeting an early and violent death.

After being accepted as a Party member, Jim is mentored by Mac McLeod, an experienced field worker, who the Party sends to take advantage of a wage conflict between apple pickers and their bosses in the Torgas Valley. Mac takes Jim along to give him hands-on training in fieldwork.

From the beginning, Mac tells Jim they have to be alert and take advantage of any opportunity given them to get the men to accept them and allow themselves to be organized, and Mac has a genius for recognizing opportunities. When he learns the daughter-in-law of London, the unofficial leader of one group of men, is about to give birth at the pickers’ primitive camp, he risks the girl’s life to exploit the situation and ingratiate himself with London. Using that relationship, Mac convinces the workers on three ranches to go out on strike against the growers, then secures private land for the strikers to camp on and brings in a doctor who sometimes works for the Party to set up the camp and oversee sanitary conditions.

Although Jim is eager to get involved in the strike, for the most part Mac uses him only to mix in with the men and find out how they feel about what is going on. After Jim goes out with a group of pickets and is wounded, Mac keeps him closer than ever, but all the time Jim is watching and learning how Mac manipulates men, and he is becoming as single-minded about putting the Party’s needs above the needs of individual men as Mac himself is.

Finally, an act of vigilantism against the man who has let the strikers camp on his land ends their welcome, and without a place for the men to stay, the strike is doomed. The only questions are whether the strikers will stay and fight as long as they are able or whether they will just quietly break up and go away.

Mac and Jim are tricked into going out alone into the orchard, where a vigilante ambush awaits them. Mac realizes their danger too late, and Jim pays with his life. Seeing another opportunity to revive the faltering strike, Mac brushes his emotions about his friend’s death aside and takes Jim’s body back to the camp, placing it on a platform where the strikers can see it and using it to rally them to remain united.