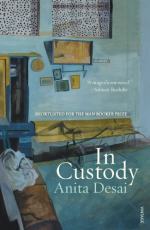 Anita Desai
This Study Guide consists of approximately 82 pages of chapter summaries, quotes, character analysis, themes, and more - everything you need to sharpen your knowledge of In Custody.

In Custody: A Novel Summary & Study Guide includes comprehensive information and analysis to help you understand the book. This study guide contains the following sections:

This detailed literature summary also contains Quotes and a Free Quiz on In Custody: A Novel by Anita Desai.

The following version of this book was used to create this study guide: Desai, Anita. In Custody. Penguin Books, 1994.

The narrative unfolds from the third-person perspective of protagonist Deven, a middle-aged college professor whose love for poetry and the Urdu language leads him into a tragi-comic series of encounters that challenge his faith in humanity and in what he has always believed about himself.

The narrative begins with an encounter that sends both the plot and Deven’s process of self-discovery in motion. His wealthy and manipulative friend from long-ago school days, Murad, invites him to participate in the creation of a special issue of the magazine that Murad publishes. That special issue, Murad, says, will focus on poetry written in the Urdu language. That language, narration suggests, is decreasing in both usage and influence in India, its presence in everyday life overwhelmed by the more commonly used Hindi. Deven, who teaches Hindi but loves Urdu poetry, agrees. Murad assigns him the task of getting in touch with Nur, one of the most renowned Urdu poets in India and someone whom Deven has idolized for much of his life. Deven eagerly agrees, excited about the opportunity to meet his idol but anxious that he will not be found worthy of the great man’s attention.

With that, Deven sets off on his quest to meet Nur, interview him, and perhaps obtain some of his more recent poetry – the narration reveals that Nur has not published anything new for quite some time. When Deven eventually does find Nur, he is upset to discover that the renowned poet is frail and poorly taken care of. He also finds Nur surrounded by sycophantic followers who flatter him and praise him and live off his generosity but do not offer him anything genuine in terms of support or inspiration. As Deven’s efforts to connect with Nur intensify, he becomes increasingly disillusioned that the author of such beautiful and inspiring works of poetic art lives a life of such physical, psychological, and emotional squalor.

Meanwhile, Deven is struggling to find happiness, contentment, and security in his life at home. He and his wife Sarla are both unhappy, Sarla having been profoundly disillusioned by the realities of marriage and Deven having been profoundly disappointed in the lack of respect and support from his wife. This leads him to become even more determined to spend time with Nur and allow his inner life to be transformed by his coming nearer to the great man, his work, and the sources of his inspiration. For help in these efforts, he enlists his friend Siddiqui, a colleague at the college who helps him obtain the necessary funds and materials.

As the obstacles to his successfully completing his assignment become more and more challenging, Deven becomes more and more frustrated. As a result of his failures, he questions his fundamental self-worth and his beliefs about poetry. He takes out his frustration and confusion on Sarla, erupting in anger towards her even as Murad is erupting in anger towards him at the delays and costs of the assignment.

Eventually, Deven arranges for Nur to be taken to a room away from his busy home. There, he hopes, Nur will be free to concentrate on both writing and remembering his poetry, as well as the various influences of his work. Deven becomes increasingly upset, however, as Nur’s followers travel with him, distracting him even while Deven is attempting to get him to focus. Deven is particularly anxious because he has been attempting to record Nur’s voice on a second-hand tape recorder, and so far has had little success.

Eventually, Deven’s project comes to an end. He is upset and frustrated to learn that the recording is essentially useless, and becomes frightened at the prospect of telling both Murad and the college, who supported the project, that it has been a failure. He has a long and sleepless night, but in the morning has something of a spiritual awakening that makes him realize that he and Nur, the follower and the guru, the poetry lover and the poet, are in each other’s custody, or safekeeping. He also realizes that ultimately, nothing has happened or can happen to damage or change that pleasure, or that responsibility. He prepares to face the coming storms with a newfound sense of security in who he is, what he holds dear, and what he has done.

More summaries and resources for teaching or studying In Custody: A Novel.

In Custody: A Novel from BookRags. (c)2022 BookRags, Inc. All rights reserved.