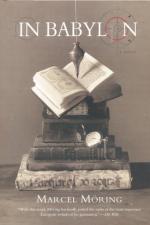 Write a poem or a short story that focuses on the subject of being an outsider of a family, a social group, or a culture.

Read Anne Frank: The Diary of a Young Girl and prepare a PowerPoint presentation noting the historical details of Frank's story as well as her response to her harrowing life in hiding.

Research and write a report on the treatment of Jewish refugees in the United States prior to and at the start of World War II.

Zeno's cult following is a reflection of the movement in the 1960s toward alternative forms of spirituality. Research those forms along with the various cults that appeared in the 1970s and 1980s. Be prepared to lead a discussion on how leaders of these cults came to power and were able to have such a great influence on their followers.

In Babylon from BookRags. (c)2022 BookRags, Inc. All rights reserved.