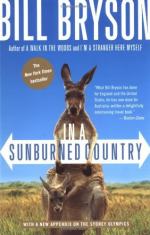 In a Sunburned Country Summary & Study Guide includes comprehensive information and analysis to help you understand the book. This study guide contains the following sections:

This detailed literature summary also contains Topics for Discussion and a Free Quiz on In a Sunburned Country by Bill Bryson.

Journalist and humorist Bill Bryson takes three trips down under to tell the story of the forgotten continent. Australia, a land of extremes representing almost every climate on Earth and filled with more unique flora and fauna than any other continent, is largely ignored by the rest of the world. Coverage of political news from Australia is scant in western presses, and social news from the continent is almost nonexistent, despite its size and prominence in world affairs, both as a land of immense resources, and as a unique fighting force in the great wars of the twentieth century.

Bryson's first trip takes him to Sydney, where he walks the town, admiring the famous Sydney Opera House and the Harbor Bridge. In vain, he attempts to boogie board at a local beach, then finds himself stupefied by the glitz of the local gambling club. Next, he and photographer Trevor Ray Hart hop the famous Indian Pacific railroad for a ride across the bottom half of the continent to Perth.

On his second trip, Bryson takes a driving tour of the Boomerang Coast, the crescent of inhabited area along Australia's southeastern shore that contains the bulk of its people and its four largest cities. From Sydney, Bryson visits the rather bucolic Canberra, capital of Australia and a city lost within a park. After that, Adelaide, the southernmost of the four great cities of the Boomerang Coast, where citizens seem to go out of their way to tell Bryson that the city, which has lost much of its former commercial success to Sydney, is dying. Finally, Bryson sets off for Melbourne, where a couple of friends show him around the city and the surrounding country.

For his third and final trip, Bryson takes along a friend named Allan Sherwin. They go for a dip in the Great Barrier Reef, Bryson again wholly inept in the water, before hoping a flight to Darwin, the tiny town that sits "topside," as the Aussies say, on the northern coast. From Darwin, Bryson and Sherwin drive due south into Australia's punishing interior to Alice Springs. There they make a brief excursion to see Ayer's Rock, or as the Aborigines call it Uluru, a massive sandstone formation that impresses both men with its solemnity and grace. Sherwin flies home from Alice Springs and Bryson flies back to Perth to take two excursions, first south and then north. First south into the forests of southwest Australia to see the jarrah and karri trees rise hundreds of feet above the forest floor. Second, and lastly, to the north to visit the living descendants of the oldest lifeforms known to man.

Throughout his trip, Bryson fills the reader in on many points of Australia's remarkable history. His stories are shocking, amazing, and at times disturbing, but his wry sense of humorous suffuses the book and his enthusiasm for Australia, the land and its people, shines.

In a Sunburned Country from BookRags. (c)2022 BookRags, Inc. All rights reserved.