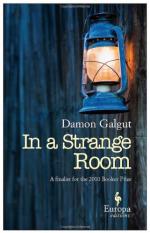 Damon Galgut
This Study Guide consists of approximately 31 pages of chapter summaries, quotes, character analysis, themes, and more - everything you need to sharpen your knowledge of In a Strange Room.

In a Strange Room Summary & Study Guide includes comprehensive information and analysis to help you understand the book. This study guide contains the following sections:

This detailed literature summary also contains Topics for Discussion and a Free Quiz on In a Strange Room by Damon Galgut.

"In a Strange Room" by Damon Galgut is the story of Damon who begins in the story as a solitary and unhappy young man who is traveling by foot in Greece. Damon travels constantly not because he enjoys seeing the sights or because he wants to learn about other cultures and peoples. He stays on the move because he is fundamentally very unhappy with life and doesn't have as much time to think about his miserable existence while traveling from place to place. The story is set in modern times, but Damon, who hails from South Africa, spends the majority of his time on foot during the first of the three sections of the book. The reader is privy to Damon's private thoughts and when he encounters another traveler, it is apparent that he is intrigued by the slightly older man. They seem to have an immediate connection and wind up traveling together.

The first part of the book is entitled, "The Follower," and it is obvious that Damon, the younger of the two men, is the follower. The older man, a German named Reiner, is the dominant person in this traveling twosome. Reiner decides when they will begin their walk each day, where they will walk and how long they will walk each day. Damon, although ostensibly compliant, is grappling with a growing resentment for his co-traveler to whom he is both subservient and physically attracted. Their relationship ends when Damon finally blows up and vents all his complaints to Reiner.

In the next section, "The Lover," Damon is some years older now and is still traveling. He meets a young man on his travels named Jerome. Although they speak different languages, Damon finds the young man physically attractive. And although Jerome seems to recognize Damon's attraction for him and he seems to have a mild attraction for Damon himself, neither man has enough self-confidence to pursue a real, intimate relationship.

In the final section, "The Guardian," Damon has found his niche in life. As a caretaker for a mentally disturbed friend, Damon stays busy and finally has a feeling of purpose. He watches his friend, Anna, to make sure she takes her medications and stays away from alcohol and recreational drugs. He also has to stay vigilant so that she does not commit suicide which is a looming threat throughout their time together. Finally, Anna makes a serious attempt on her life and Damon is at her side during her recovery. However, Damon's inability to truly connect on an emotional level is obvious when he tells Anna that he will keep her alive while he's with her while he's her guardian. But when she leaves and returns home, he tells her she can do whatever she likes and presumably, even commit suicide.

More summaries and resources for teaching or studying In a Strange Room.

In a Strange Room from BookRags. (c)2022 BookRags, Inc. All rights reserved.