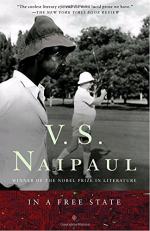 In a Free State Summary & Study Guide includes comprehensive information and analysis to help you understand the book. This study guide contains the following sections:

This detailed literature summary also contains Quotes and a Free Quiz on In a Free State by V.S. Naipaul.

This guide was made with the following version of this book: Naipaul, V.S. In a Free State. New York: Vintage. 2002.

Prologue, from a Journal: The Tramp at Piraeus:

The unnamed narrator boarded a steamer at Piraeus for a two-day trip to Alexandria. The narrator had seating on the upper part of the ship, where he and other passengers had cabins and bunks, while those on the lower part of the ship remained on the deck did not have the same accommodations. Among the other travelers were Egyptian Greeks who had been expelled from Egypt and were now returning as tourists, Lebanese businessmen, Spanish dancers, Egyptian students, and a tramp. The narrator noticed the tramp engaging in odd behavior, desperately trying to get attention, while also revealing to a passenger that he had been traveling for a long time and lived in youth hostels while he did so. The two Lebanese businessmen became upset with the tramp behavior, and, with an Austrian passenger, decided to ambush him as a means of deterring his company. Afterwards, the tramp kept his distance from the larger group till the end of the trip.

One Out of Many:

Santosh was originally from Bombay, where he enjoyed his life as the servant to a civil officer. He slept on the streets with his friends and enjoyed their company. Despite having a family in a distant village, he was content with his life in Bombay and worried about change when his employer learned of a transfer to Washington, D.C. The employer was able to find a way to take Santosh with him, but he warned of the financial difficulties, as the rupee was worth much less than the American dollar. Once in Washington, Santosh was overwhelmed by his new surroundings, finding it difficult to navigate his new surroundings and the new culture therein.

Going on a walk one evening, Santosh came across Priya, a fellow Indian who had opened his own restaurant. Santosh offered to work as a chef and received a much better salary and living space. In the mail, he found a green suit sent by his employer. Realizing that he was illegally in the country due to leaving his employer, Santosh becmae filled with fear. A friend of his employer came and gave Santosh a tip, which forced Priya to give him a raise. Filled with difficulty, Santosh approached the maid who seduced him and asks her to marry him, in the hopes of receiving a green card.

Tell Me Who to Kill:

A West Indian man was accompanied by a white male named Frank as he went to his brother's wedding. He remembered the old days in his native country where he lived a simple life with his family and brother, Dayo, whom he hoped would live a better life than him. The family was often visited by their uncle, Stephen, who lived in the city. Stephen often poked fun at the family in a condescending manner, a manner that his wife and daughters also possessed. After he sent his son to Montreal for higher education, Stephen took Dayo with him so he could receive an education. When the man went to visit, Dayo revealed he was not happy and was being treated poorly by Stephen's family, while at the same time Stephen's son had gone off on his own accord in Montreal. Scrounging money together, the man was able to send Dayo to London for higher education. He then traveled to London himself and found a job in a cigarette factory, while also looking after Dayo, who did no appear to be studying and offered excuses instead.

Working two jobs, the man saved two thousand pounds and bought a curry shop. Not understanding business practices, he became overwhelmed with the lack of incoming money and the constant harassment he faced from the local boys. After witnessing Dayo wandering during the day instead of being in college, the man became upset and stabbed a boy who was harassing him, and who turned out to be Dayo's friend. He was full of anger and love at Dayo's wedding, and sent a message home to his family that he had died.

In a Free State:

In an unnamed African country, there was a conflict brewing between a president and king who belonged to different tribes and were vying for complete power as the colonists were leaving. The president was supported by the British, who sent his forces to the king's Southern Collectorate to overthrow him, which is where Bobby worked. From the capital of New Shropshire in the north, Bobby had to share a ride with Linda, the wife of a man who worked in the Southern Collectorate. Through the car ride, both of them shared uneasy silences and intimate conversations, Bobby talking about his homosexuality and a breakdown he had while at Oxford. Linda talked about her desire to leave the African country and move to South Africa, while Bobby had decided to call the Southern Collectorate his home.

Along the journey, Linda attempted to have an adulterous affair with an American man, an involvement that upset Bobby. They stopped at the hotel of a paranoid British colonel, where Bobby mistook a local boy's interest for sexual desire. Driving further, they reached a checkpoint, where Bobby was beaten by soldiers despite his protestations that he was a government officer. Humiliated, he returned to his home, where his houseboy, Luke, a native, did not show any interest in his injuries, prompting Bobby to think about firing him.

Epilogue, from a Journal: The Circus at Luxor:

Travelling to Egypt, the narrator noticed a group of Chinese people who were coming through as part of a circus. He returned to Cairo and took a trip to Luxor, walking through the ancient tombs and noticing the beggar boys. There was a native with a whip who beat the children anytime they came near the tourists. One Italian man took to throwing things at them, watching the man the children, and repeating his gesture. The narrator became exasperated at this behavior and the other tourists' apathy, deciding to forcibly take the whip from the Egyptian. The Egyptian became terrified, asking for forgiveness and that the man not report him to his superiors. The narrator kept an eye on the Italian for the rest of his trip, while also seeing the Chinese men who were part of the circus he had seen in Milan. He eventually returned to Cairo.

In a Free State from BookRags. (c)2022 BookRags, Inc. All rights reserved.