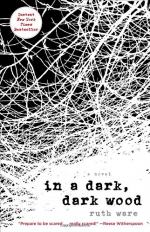 In a Dark, Dark Wood Summary & Study Guide includes comprehensive information and analysis to help you understand the book. This study guide contains the following sections:

This detailed literature summary also contains Quotes and a Free Quiz on In a Dark, Dark Wood by .

In a Dark, Dark Wood is a psychological murder mystery novel by Ruth Ware. The novel tells the story of unreliable, amnesiac narrator Nora Shaw as she attempts to recall the events of a bachelorette weekend in which a man was murdered that both she and the bride-to-be loved.

When the novel begins, Nora, a twenty-six year-old writer living in London, wonders why she has been invited to Clare Cavendish’s hen do (bachelorette party weekend), because she and her old college friend have barely spoken for years. Nora consults her friend Nina de Souza, who has also been invited. Both girls decide to attend the weekend as long as the other goes.

Nora and Nina rent a car to drive to Northumberland to stay in a summer house in Kiedler Forest near the village of Stanebridge. The summer house belongs to the aunt of Clare’s best friend and hen host, Florence “Flo” Clay. A few others are also in attendance, including Melanie, a new mother and old roommate of Flo and Clare’s, and Tom, a gay playwright who works with Nora at the Royal Theatre Company. Tom is made uncomfortable by a shotgun kept in the house, even though it is only loaded with blanks. That evening, Nora goes out for a run, and encounters Clare on her way to the house. Clare explains to Nora that she needed to tell Nora face-to-face that she is marrying James, Nora’s ex-boyfriend whom Nora never really got over. Nora is stunned.

As the weekend progresses, Melanie leaves early because she misses her family too much, while Nora and Nina note that Flo has obsessive behavior toward Clare thanks to an unknown incident in which Clare saved Flo’s life. Nora also discovers that her phone has gone missing, and that a set of footprints is seen leading from the garage to the house. Late at night, a man appears in the house. Flo intends to scare him off with the shotgun, only to discover that it is not loaded with blanks. The injured man turns out to be James. Clare rushes to drive James to the hospital. Nora’s memory becomes very spotty between here and her own arrival at a hospital with a terrible head injury which has cost her her short-term memory. The police come to consider Nora a suspect, for Clare is also in the hospital, and Nora struggles to remember what happened.

Nora ultimately remembers running to catch Clare’s car on the night of the shooting, for Clare had left her jacket on the porch railing. Inside the jacket pocket was a shotgun blank, meaning that Clare had switched them out. Clare allowed Nora into the car, during which time Clare tried to kill them all. Only Nora grabbing the wheel stopped a serious accident.

Nora learns that Clare used her cell phone to lure James to the weekend house under false pretenses, dating back to the time Nora and James were in a relationship as teenagers. During her teenage years, Nora had been impregnated by James and had an abortion because James insisted she do so. In reality, it was actually Clare, who wanted James for herself, that sent the text messages from James’s phone, forcing the abortion and eventual breakup. Years later, James wanted to make things right before getting married so that Nora would know the truth. To prevent this and to retain her image as a perfect person, Clare decided to have James accidentally killed by using the story that Nora wanted a reunion with him. Clare is brought to justice, and Nora attempts to return to normal life.

In a Dark, Dark Wood from BookRags. (c)2022 BookRags, Inc. All rights reserved.