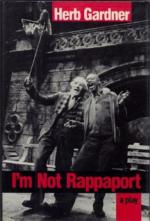 This scene opens twelve days later, following Midge's release from a hospital stay as a result of Cowboy's attack. Nat greets his friend but it is clear that Nat is more subdued and even tells Midge that he has retired his mouth, meaning no more stories. The Mafia ruse resulted in serious harm to Midge and even Nat knows when it is time to stop. Nat also realizes that his fabrications have hurt Clara and that cannot continue.

Midge reveals that he has formally lost his job as building superintendent because Danforth has discovered that there is no such organization as HURTSFOE. In the time that Midge has been hospitalized, Gilley had reappeared and announced that his protection fee has risen from three dollars to five dollars, a fee which neither man is able to pay.