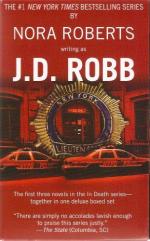 Nora Roberts
This Study Guide consists of approximately 48 pages of chapter summaries, quotes, character analysis, themes, and more - everything you need to sharpen your knowledge of Immortal in Death.

This detailed literature summary also contains Topics for Discussion and a Free Quiz on Immortal in Death by Nora Roberts.

Immortal in Death, by Nora Roberts, writing as J. D. Robb, is a murder mystery featuring futuristic homicide detective Eve Dallas. Eve has been a New York City homicide detective for ten years and takes great pride in doing her job well, professionally, and keeping her private and professional lives separate. A recent case, the victim being a child, sparks memories from her unknown childhood that result in recurring nightmares that make it necessary for Eve to somehow connect the two distinct portions of her life. Fortunately for Eve, she has found a friend in Mavis, a loud pop singer with blue hair she had once arrested on a prior case, who cares deeply for Eve and her upcoming marriage to Roarke. Roarke is the mysterious and very rich man who has fallen in love with Eve Dallas and will not take any answer other than yes from Eve.

The story opens with Eve having to choose a wedding dress. Her only satisfaction in this endeavor is that her friend, Mavis, will be helping her to find an appropriate dress. This fact frightens Roarke, who rarely fears anything. Mavis leads Eve to Leonardo, her current lover, and a dress designer. While at the studio, Eve is attacked by a wild red-headed woman named Pandora who is a top model, and is later found violently murdered in Leonardo's studio with Mavis as the main suspect.

Eve's foray into the case is complicated by the fact that she is friends with the primary suspect and a secondary suspect is designing her wedding dress. Further complicating matters is a past that is hidden in her mind that chooses to come to light in her nightmares, becoming ever more graphic until she remembers everything that she had wished to forget forever. Rather than being a nurturing and loving father, Eve's father abused his young daughter sexually and physically for years. Finally, Eve was unable to take the abuse any longer and finally fought back. She suffered a broken arm, but her father paid with his life at Eve's hands. This causes Eve to reconsider everything that she stands for, and her first instinct is to leave the police force and leave Roarke. Because of his love for Eve and his own abusive past, Roarke understands Eve better than anyone and refuses to allow her to leave him and summons Dr. Mira, the police psychologist, to counsel Eve regarding her recent memory recovery. Dr. Mira compassionately tells Eve that what she suffered as a child was at the hands of a monster, and that her case would be one of pure self-defense, a position the Chief of Police upholds.

This behind her, Eve must now continue to work to clear her friend's name of the murder charge that is still attached to Mavis. A second, third, and fourth murder further confuse the case, but actually work to clear Mavis. By this time, Eve has discovered that the problem is an illegal drug that is designed to promise eternal youth, increased sexual drive and desire, as well as greater physical strength and vigor. Such a combination would take the world by storm. The only drawback is that the combination of the drug components is highly addictive and will cause death within five years. Eve's job is to bring the murderer to justice and she must work cooperatively with the Illegals Department of the police force, specifically agent Jake T. Casto, who makes no secret that he admires Eve, probably more for her physical attributes than her mental ones. But, as he cannot have Eve, he chooses to sleep with Eve's aide, Peabody. This gives Casto firsthand knowledge of just about every step of the case. This works very well for Casto, because he is the murderer, and his position as an agent in Illegals puts him in a very good place to make a great deal of money while he obfuscates the murder cases because of his position and inside information.

The story deals with an off-planet plant, the nectar of which is critical to the creation of the drug Immortality. Two women, both of them models, will stop at nothing in order to retain their hold on a personal supply of Immortality, perhaps not really even knowing that by becoming addicted to the substance, they had already sealed their own fate. Friendship and love play a very big role in the story, giving Eve a family that she had never experienced in her life, and with that family she experiences the pains and responsibilities that come with it. Eve's professional abilities are unparalleled, but her life is on the line when she proves to be too smart for Jake. His only option is to kill her in order to protect his financial and professional future. Fortunately for Eve, her new family, made up of Roarke, Mavis, Dr. Mira, and Peabody know that she would not disappear the way she did, so they come to the rescue just in time. The story ends with a very much battered Eve, made-up and dressed to kill in time to attend her wedding to Roarke.

More summaries and resources for teaching or studying Immortal in Death.