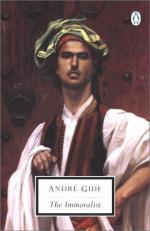 Additional Resources for The Immoralist by André Gide

Ahmida, Ali Abdulolatif, ed., Beyond Colonialism and Nationalism in the Maghrib: History, Culture, and Politics, Palgrave, 2000.

Ahmida provides a collection of critical essays by various authors on the history, culture, and politics of North Africa and Egypt in the nineteenth century.

Barnes offers a cultural, medical, and socioeconomic history of tuberculosis in France during the nineteenth century.

Benjamin discusses the influence of North African culture on French art during the period of the French colonial occupation.

Fryer examines the friendship between André Gide and Oscar Wilde in terms of homosexual identity and lifestyles during the late-nineteenth and early-twentieth...