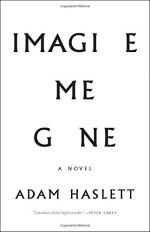 This detailed literature summary also contains Quotes and a Free Quiz on Imagine Me Gone by Adam Haslett.

In Imagine Me Gone by Adam Haslett, a young American named Margaret is engaged to marry a young Englishman, John. After a visit to the United States for Christmas, she returns to England and discovers that John is in the hospital. He is once again suffering from depression, something that has not happened for years. Margaret decides to go ahead with the wedding and stays by his side as he recovers.

Years later, Margaret and John are still together. They are the parents of Michael, Celia, and Alec. Of the three, Michael is the only one who has inherited John's mental illness. He suffers from extreme anxiety. Life changes for John, though, as he experiences a series of job losses that lead to unemployment without the prospect of future employment. He feels that he has let the family down, and his depression returns. Finally, he says goodbye to the children and commits suicide.

After his death, the family’s attention turns to supporting Michael, whose mental condition deteriorates as he gets older. He becomes obsessed with women who are unattainable because they are married or lesbians. His obsession causes them to avoid him at times. This increases his anxiety. He also has problems getting into college and later graduate school. While he finally gets in both, he does not finish. He drops out of college and a mental breakdown forces him to leave graduate school and move in with his mother. Throughout his life, he has taken out loans with no prospects of being able to pay them back. This also adds to his anxiety. Medication is the only thing that allows him to cope, but the more medication he takes, the more he needs.

When Michael has anxiety attacks, he turns to his family for help. They attempt to support him as he chases after the girls who do not show up for dates and he feels as though he cannot breathe. Supporting him often means ignoring others or comes at a financial expense. At the same time, they are trying to manage their own lives. Celia is not happy with her current job and has problems committing to her live-in boyfriend. Alec is gay and also has commitment issues. Michael's inability to pay back his loans burden Margaret.

Alec decides to action in an attempt to help everyone by intervening and trying to get Michael off his medication. Celia is doubtful, but hopeful that it can happen and agrees to give it a try. She feels the strain of supporting Michel and has started to pull back. Margaret also agrees. Most importantly, Michael agrees to give it a try as he wants for himself what his family wants for him.

Michael cannot function without his medication, though, and dies. Before he dies, he leaves his family with a message that helps them deal with their own issues. They finally understand him. Celia gets married; Alec commits to a partner; and, Margaret moves to a new house and begins to look back at her life with John. She sees it in terms of the wonder of what followed, instead of sadness.