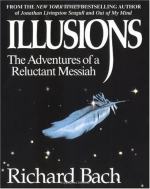 Illusions: The Adventures of a Reluctant Messiah Summary & Study Guide

Richard Bach
This Study Guide consists of approximately 37 pages of chapter summaries, quotes, character analysis, themes, and more - everything you need to sharpen your knowledge of Illusions.

Illusions: The Adventures of a Reluctant Messiah Summary & Study Guide includes comprehensive information and analysis to help you understand the book. This study guide contains the following sections:

This detailed literature summary also contains Topics for Discussion and a Free Quiz on Illusions: The Adventures of a Reluctant Messiah by Richard Bach.

Two itinerant fliers meet on a Midwestern field and the one, a retired Messiah, Donald W. Shimoda, teaches the other, the narrator, Richard, how to see the world and everything in it as illusion. The teacher is assassinated, and the pupil records his story before facing his own destiny as another reluctant messiah.

Richard, who for years has been flying his antique biplane around the Midwest offering folks ten-minute rides for three dollars a turn, is surprised to spot another gypsy flier on the ground in Ferris, Indiana, and swoops down to meet him. They quickly bond through a love of flying and mechanics, and Richard rakes in more money than ever before, teamed up with Donald W. Shimoda. He finds the man mysterious and has a sense of foreboding in his company, but is ready to give up the lonely life awhile, that is, until Shimoda attracts too much attention through the "miracle" healing a crippled man. Fearing what the crowd will do and knowing the fate of messiahs, Richard flees.

Agains all odds, Shimoda finds Richard and sets his plane down beside him. Like attracts like, he says and explains they are fellow messiahs. Shimoda knows it, but Richard does not - yet. By "miracles" small and large, Shimoda whets Richard's interest, but Shimoda claims there is nothing miraculous in what he does. One simply must realize the world and all it contains are illusion. The space-time continuum is false. One chooses how to live each of one's many lifetimes, for the person created in the perfect likeness of "The Infinite Radiant Is," i.e., God, is indestructible. Over many lifetimes, Shimoda has learned to be a Messiah, finds it wearying, and has retired with God's blessing but cannot unlearn all he has learned. He takes Richard under his intellectual and spiritual wing, as wing-to-wing they fly from one farming community to the next offering rides and making good money.

Richard is an avid pupil but finds mastering such techniques as cloud-vaporizing; the magnetizing of objects as tiny as a blue feather; walking on water; breathing in water; swimming through dry ground; and sinking into solid earth as though it were liquid, more difficult than he knows they should be. Richard is thoroughly frustrating. Much of the problem lies in Shimoda's maddening teaching techniques, which insists Richard discover truths and master techniques on his own. He shows Richard the standard Messiah's Manual & Reminders for the Advanced Souls, a small book of maxims, which sometimes helps clarify things and sometimes only frustrates more. When Richard cannot apply all he has mastered to the task of walking through walls, Shimoda shows him it is possible and takes Richard to a movie theater, where a clearly-illusionary experience helps clarify his mind. It is well-known and easily understood that one must suspend belief in order to enter the storyline of a movie, which is, after all, a series of non-moving images that depend on being projected on a screen to produce the appearance of reality in space and time. Only a small further step is required to see one's many lifetimes as films, whose genre and outcome one chooses rather than having been thrust upon them.

Richard finally sees the point; accepts he knows what he knows; says what he says, and it matters not whether anyone listens or agrees with him. Richard thus "graduates," but has little time left with his Master. His long-held premonition of evil and doom is fulfilled as Shimoda appears as a guest on a late-night radio talk show, intentionally infuriates the listeners and the next day at high noon is assassinated before Richard's eyes. Shimoda lessens the shock somewhat by coming to in Richard in a dream, their roles fully reversed. Shimoda assures Richard they are linked forever and can still discuss matters, but he is tired of living in time and space. Overriding his intention never to write again, Richard begins a journal entry about his late friend, the Reluctant Messiah.

More summaries and resources for teaching or studying Illusions: The Adventures of a Reluctant Messiah.

Illusions: The Adventures of a Reluctant Messiah from BookRags. (c)2022 BookRags, Inc. All rights reserved.