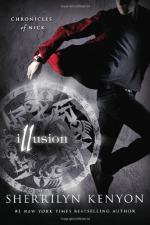 This detailed literature summary also contains Quotes and a Free Quiz on Illusion: Chronicles of Nick by Sherrilyn Kenyon.

Nick Gautier wakes up on the first page of the novel in a different world – his own body is different, and everyone around him is familiar but not themselves. He’s at the same school, but not in the same time period. Nick is obviously disoriented, and beginning the narrative “in medias res” puts the reader right alongside Nick in feeling confused. A slew of characters are introduced immediately, whom Nick is familiar with though they are all different in this realm, and the style assumes a certain level of reader familiarity as well. Readers who have not read previous installments of the series simply have to keep up as Nick throws out terms like “Malachai,” “Charonte demon,” and “demigod demonspawn.”

It isn’t until page 15 that readers discover the key information of what Nick was doing immediately before he woke up at the prom: he fought in a pitched battle to save his mother, during which his father had died and turned Nick into one of the most powerful demons in the universe. Nick shows no signs of grief, leading the reader to assume Nick’s relationship with his father was not good. Through this writing style, the author, Sherrilyn Kenyon, sets the tone and pace from the first page. Things happen suddenly in Nick’s world, and even he struggles to keep up with the onslaught of new information and ever-shifting factors. This mutual confusion draws the reader into the story alongside Nick, to puzzle out what is happening together.

The novel deals with questions concerning the nature of reality. Nick wonders if this alternate realm is his true reality, and the world in which he is demonspawn destined to destroy the entire world is perhaps an illusion, as the title suggests. As Nick says, “What is reality, anyway? Really? Was it what he knew or what he thought he knew?” (Page 49). This is a reasonable question, given the absurdity of a demon fighting demons premise of his “real” life.” On the other hand, maybe Nick is dreaming and this normal reality is just a projection of his subconscious, a wish fulfillment for a simpler life. Normalcy is a key theme in Nick’s life; at home he is a misfit at school, and constantly defending himself from demons. While most teenagers dream of being extraordinary, Nick understands the responsibility of having special gifts. Readers should note as the novel progresses whether Nick finds being normal preferable to being the Malachai.

The novel is set in New Orleans, and the dialogue helps add local texture to immerse the reader in the American south. Nick refers to women as “ma’am” and says to the woman who lives in Kyrian’s house, “My mama don’t need to know I was here” (Page 34). Readers should note if there are any other ways that New Orleans adds significance to the action of the novel, for it is a reputed supernatural hotspot.

When Nick meets Selena and Tabitha, he wonders why they are exactly the same as they are in his reality, when everyone else he has met is completely different. Selena chalks it up to a stubbornness of personality, but Nick’s recurring feeling of oddness, coupled with his initial, fleeting distrust of psychics as charlatans (Selena is a psychic) are subtle hints of foreshadowing that perhaps the Devereaux sisters are not what they appear to be. Nick also has a vision of Kyrian and Amanda Devereaux and how their futures will be entwined. He worries that his travel through time could alter the space-time continuum, and destroy people’s destinies unwittingly. Readers should also stay alert to see if this is also foreshadowing something to come.